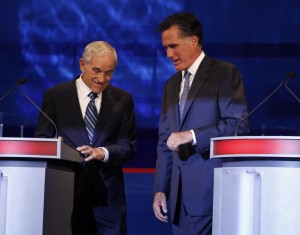 Romney and Paul are the only two candidates on the ballot for Virginia's 2012 GOP presidential primary.

For Virginia, Super Tuesday may not be so super after all. Due to a law in the state’s constitution requiring presidential candidates to gather 10,000 signatures of registered Virginia voters in order to be put on the ballot, the majority of the Republican candidates running for president in 2012 will not appear on voter’s ballots in the March 6 primary.

Only former Massachusetts governor, and current frontrunner, Mitt Romney and Texas Rep Ron Paul gathered the requisite amount of signatures by the set deadline and were thus deemed eligible.

On December 27 of 2011, Rick Perry, accompanied by fellow candidates Newt Gingrich, Rick Santorum and Jon Huntsman, filed a lawsuit arguing that this eligibility requirement is unconstitutional and requested that his name be added to the ballot.

However, on January 13, U.S. District Judge John Gibney ruled against Perry and co., saying that, regardless of the constitutional validity of the requirement, they took too long to make any challenges to the rule, given that officials need a sufficient amount of time to print the ballots so that they may be distributed to overseas and absentee voters on time.

Rick Perry and Gingrich both filed an appeal the following day, but their bid seems futile as the court also refused to stall the printing process while waiting for an official court decision. Though the case was still pending, Gingrich subsequently dropped his suit.

So, how will this affect the primary and the overall race? Though Perry has dropped out of the presidential race completely, many, including Judge Gibney himself, agree that this eligibility requirement disenfranchises voters and is unconstitutional.

The biggest winner in this scenario might be Ron Paul, who could potentially give his campaign a boost if he manages to coalesce the anti-Romney vote that would otherwise have been split between several candidates. However, recent polls suggest that Romney has an overwhelming lead among Republican voters. More importantly, Obama has the edge over both primary candidates, though he is ahead of Romney by only a slim margin.

This divisiveness is setting up Virginia as a key battleground state not only for the upcoming GOP primary, but for the general election as well.