Virginia’s GOP primary is fast approaching. On March 6, also known as Super Tuesday, Virginia will vote alongside several other states to help determine who will receive the 2012 Republican nomination for president. Here are a few things you need to know to be ready for the primary and the presidential election in November.

First, some background information about Virginia voting laws and how elections work in the state is important. Voting and elections in the Commonwealth of Virginia are run by the State Board of Elections, which oversees voter registration, implementation of election procedures, etc. for local, state and national elections.

Especially for college students, it is also important to know how to register to vote in Virginia. Voter eligibility requirements are as follows:

Registration applications may be found at any number of locations, including a local voter registration office, online, DMV offices, public libraries and the State Board of Elections office. The completed application should be filed with your local registration office or mailed to the address printed on the form. The registration deadline for both primaries and general elections is 22 days before the election is held. 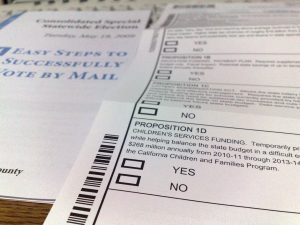 College students must establish residency in Virginia in order to vote in this state’s elections. According to the Virginia State Board of Elections website, residency is established by a physical location the voter intends to stay at for an unlimited amount of time. Students are allowed to use their dorm or college address for this.

Any students who wish to register to vote in Virginia but are already registered in another state or district must cancel their other registrations first. Students attending a school in a different location from where they are registered may vote using an absentee ballot (see more information below).

Voter ID Requirements and Other Information about Going to Vote

In order to vote, all voters must bring identification to the polls. People who registered to vote by mail and are voting for the first time in a federal election are subject to special requirements:

All other voters must present any of the following forms of ID:

How to Vote with an Absentee Ballot

Anyone who will not be present at his or her registered voting location at the time the polls are open can apply to vote using an absentee ballot. In order to apply for an absentee ballot, you must either complete an online application or get an application from your local Voter Registration Office.

The application must be received by the Voter Registration Office by 5:00 PM EST on the Tuesday prior to the day you choose to vote. In-person absentee voting lasts from at least 45 days before the established election day and generally ends the Saturday before the election. A new, completed application must be sent in for every election you intend to vote absentee.

Now that you have the right information, you can register to vote and be prepared to vote in either the upcoming GOP primary or in the November presidential general election. Remember every vote counts.

For additional and more detailed information about registration and voting in Virginia, you can visit these websites: