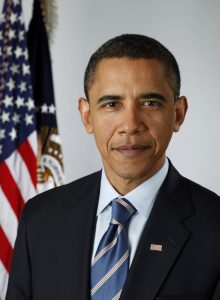 Born in Hawaii on August 4, 1961 Barack Obama is the 44th president of the United States. With a father from Kenya and a mother from Missouri, he was primarily raised by his grandmother.

In 1979 Obama attended Occidental College, then transfered to Columbia University where he graduated with a major in political science, with a specialty in international relations.

Obama also attended Harvard University, where he became the first African American president of the Harvard Law Review. He graduated with a degree in law in 1991.

In 1996 he was first elected to the Illinois State Senate. In 2004, he was elected to the U.S. Senate, where he served until successfully running for president in 2008.

He is the first African American U.S. president.

In October 2009 he won the Nobel Peace Prize, “for his extraordinary efforts to strengthen international diplomacy and cooperation between peoples.”

He is married to Michelle Obama, and has two daughters, Sasha and Malia. The First Family also has a dog named Bo.