Born in Bloomfield Hills, Michigan on March 12, 1947, Mitt Romney is one of the candidates competing for the 2012 Republican presidential nomination. He got his B.A. from Brigham Young University in 1971 and dual degrees from Harvard Business School and Harvard Law School. 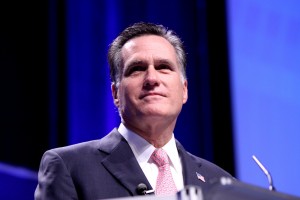 He has worked in both the public and private sectors, founding the investment firm Bain Capital in 1984 and later becoming CEO of its parent company, Bain & Company, in 1990. Despite a losing bid for a Massachusetts seat in the U.S. Senate in 1994, he was the Governor of Massachusetts from 2002-2007. He did not run for reelection, instead announcing that he would campaign for the Republican nomination in the 2008 presidential race, though he later lost the nomination to John McCain (R-Ariz).

He has served as Chairman of the Republican Governors Association (2006) and Chairman of Free & Strong America PAC (2008-present). He also helped organize the 2002 Salt Lake City Winter Olympics.

He is married to Ann Romney, and they have five sons and sixteen grandchildren.