Born in Harrisburg, Pennsylvania, Newt Gingrich is a former Speaker of the House and Congressman from Georgia. With a bachelor’s degree from Emory University, he got both his master’s and his doctorate at Tulane University in New Orleans. He taught History and Environmental Studies at West Georgia College for eight years. 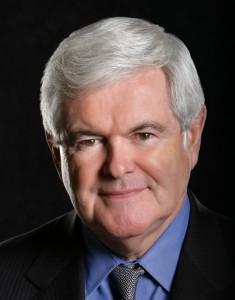 In 1978, he was elected to Congress, where he represented Georgia in the House for twenty years. He was Speaker of the House for four years, from 1994-1998.

He served on the Defense Policy Board under President George W. Bush and taught at Air University. He also taught officers from all five services as an honorary Distinguished Visiting Scholar and Professor at the National Defense University.

In 1999, Gingrich was appointed to the United States Commission on National Security/21st Century, the Hart/Rudman Commission.

He is chairman of the Gingrich Group, a communications and consulting firm; a political analyst for Fox News; founder and general chairman of the advocacy group American Solutions; founder of the Center for Health Transformation; a senior fellow at the conservative American Enterprise Institute; a visiting fellow at the Hoover Institution; and a prolific writer with 18 non-fiction books and novels to his credit.

He currently lives in McLean, Virginia, with his wife Callista. They have two daughters and two grandchildren.