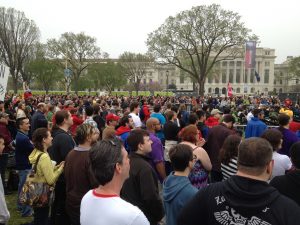 A crowd gathers at the Reason Rally in Washington DC. Photo by Flickr user makelessnoise.

The Reason Rally, held on March 24 in D.C., was billed as the largest organized gathering of secular people and organizations in world history.

The event was put on by the non-profit group Reason Rally coalition, in an attempt to empower secular Americans and dispel negative stereotypes about atheists and agnostics.

“The Reason Rally was advertising that this was going to be the biggest gathering of secular thinkers in history. I’m just so excited that I got to be apart of that. I remember how empowering it was to have all there like minded thinkers around me. I didn’t feel like I was part of a minority,” said Samantha Dilday, a sophomore biology major.

Dilday and her boyfriend Chris Glomb, senior electrical engineering major, attended the event with 20,000 other secular Americans despite the intermittent showers and chilly temperatures.

Billed as sort of “Woodstock for Atheists” by NPR, the event website stressed that the mission of the rally was not to bash religion. Instead, the goal was to show that the secular population in the U.S. is larger than it is perceived to be, and the numbers are growing.

Headliner Richard Dawkins, author of the book “The God Delusion” was joined by a range of guest speakers, from comedians to intellectuals.

“The Reason Rally is part of an effort to combat the attack of the theocrats,” Dawkins told CNN. “There is in this country at the moment a great revival of atheism, and the number of atheists in the country is much larger than people realize.” 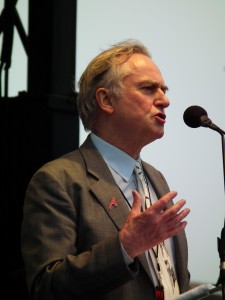 After attending the rally, Dilday was inspired to publicly announce her secular beliefs.

“The day after the rally I actually posted on my Facebook that I was an atheist. Some of my religious family members didn’t know. Some of my friends had no idea either. I just didn’t feel like hiding this part of myself anymore. I wasn’t afraid of what people might say because I know now that being athiest doesn’t mean I’m part of a minority anymore,” said Dilday.

Event goers we asked not to physically engage with the Westboro Baptist Church protesters, who were present with their usual signs denouncing homosexuals and atheists.

In a non-confrontational response, someone at the Reason Rally held up a sign proclaiming “GOD HATES FIGS.”

“I would not hesitate to go to another rally. I remember Paul Provenza, who hosted the event, reading off of his Twitter account. There were people all over the world tweeting that they wish they were there, or they wish their government would allow something like this,” Dilday said. “My heart went out to those people. Especially to Taslima Nasrin, another speaker at the rally. She was exiled from India because of her opinion of religion. I’m just lucky that I live in a country that would allow something like this, even if not all of America agrees with it.”

The political message of the rally was not lost on Glomb, who considers his atheism to have influenced how he votes.

“I’m not biased by any religious view points so my views are primarily based on people’s right to choose what’s best for themselves,” Glomb said.

At a briefing at the National Press Club, event organizer and journalist Jamilia Bey said, “We vote. We live here. We buy things. We matter.”

The event received negative commentary from Fox News correspondent Rabbi Brad Hirschfield, who said, “From its best-known speaker, Professor Richard Dawkins, to the event’s website, to its very name, this rally is not simply about protecting the rights of non-believers, but about the inferiority of religious belief.”