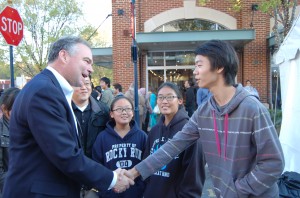 In November, Virginians will go to the polls to elect a United States Senator to fill the seat left by retiring Senator Jim Webb.  Tim Kaine is hoping Virginians will elect him.  As Governor, he improved Virginia’s economy and made education and environmental issues a top priority.  In addition to Governor, Tim Kaine has served as Mayor of Richmond, Lieutenant Governor, and Chairman of the Democratic National Committee—Kaine is now hoping to add Senator to that list. Governor Kaine took time from his busy campaign schedule to sit down and answer a few questions for the George Mason community—and for that, we thank him.

1. Your senate race is promising to be one of the most expensive of the 2012 cycle. What steps, if any, is your campaign taking to blunt the impact of out of state money?

There is no question this will be a close election that will require substantial resources to win, but those competing to be Virginia’s next Senator have a responsibility to run races that honor Virginia’s tradition of transparency and accountability in campaign finance. In the very first debate of this campaign, I offered George Allen a chance to run a no-outside money campaign, and he refused. When I gave him a second chance, and asked him to sign a pledge to keep secret money of this race, he turned me down again. Already, outside groups have spent over $1.5 million in our race on false TV ads.

But we have a secret weapon of our own, and that’s our incredible grassroots support. I am fortunate to have a strong base of grassroots support – since the start of this campaign we have received support from more than 20,000 individual donors. We will work hard to continue to build on this momentum, as every phone banker, door knocker and small dollar donor will be critical to win this race.

2. The amount of student debt incurred by today’s graduates continues to grow and has many wondering if college is even worth it. What are your thoughts on this?

Whether students choose to enroll in a university, a community college, technical school or a workforce training program, it’s important that we do more to ensure high school graduates have access to high-quality, affordable options to continue their education and increase their skills. As Lieutenant Governor, I helped shepherd $900 million into expanding the state’s higher education system, and as Governor I led passage of an additional $1.4 billion bond package in 2008 to construct state of the art classrooms and labs. I also allocated millions to need-based tuition assistance for Virginia’s students.  As Senator, I will work to increase access to higher education and preserve programs that increase the affordability of higher education, like the Pell Grant program.

But the bottom line is, students should not have to incur extraordinary debt to develop the skills they need to compete in an increasingly tough global job market. We have seen in Virginia that when we invest in education, improve its quality and lower its cost, our students develop skills that attract businesses and contribute to the talent economy that is critical to secure the United States’ position as an economic leader. I will take this Virginia lesson to Washington and pursue the same strategies at the national level, to make sure we have a national talent strategy that matches and exceeds our global competitors. 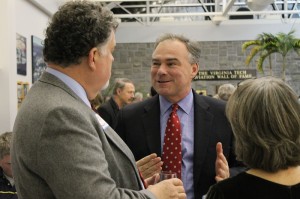 3. Recent college grads are having a hard time finding good jobs. What is your plan to get Virginia’s young people working?

I am committed to ensuring that Virginia’s higher education system adequately prepares its graduates to find jobs in an increasingly competitive job market.  All Virginia students deserve access to affordable higher education, but it’s equally important that the degrees they earn give them the skills necessary for the jobs open today. As I travel around the Commonwealth meeting with business leaders in every region of the state, I hear time and again that they have jobs available but can’t find workers with the appropriate credentials.  Improving our workforce training and technical education is absolutely essential to ensuring that today’s workers are prepared to compete for the jobs of today and tomorrow.

4. Everyone seems to agree that something needs to be done about the soaring national debt. Obviously, this is a very complicated issue, but could you give us some insight into the type of debt reducing legislation that you would support as a senator?

The federal deficit is a pressing problem, and I would support legislation that balances significant, targeted cuts with strategic investments to bolster our economy. During my term as Governor, we faced the worst national economic period since the Great Depression. In order to balance Virginia’s budget, we cut over $5 billion in state spending, including my own salary. I made major spending cuts as Governor and left office with a smaller state general fund budget than the one I inherited four years earlier. I know how to make spending cuts. But, we will never get to balance through budget cuts alone.

5. Assuming guaranteed success, what single piece of legislation would you introduce tomorrow?

I would introduce legislation that would expand opportunities for students to afford and access workforce training, community college programs and higher education – investments in our talent would help us attract businesses, grow our economy and create more jobs. For the last century, the United States has been the world’s largest economy and a leader in innovation, but we must continue to invest in education to ensure we remain the most talented nation on earth. If we fix everything else, but do not return America to its status as the best-educated nation, we will cede our role as the most dynamic economy on earth.