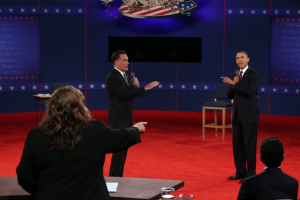 Fully understanding the implications of his disastrous performance during the first presidential debate, President Obama came back in full swing at last night’s Town Hall.  He was able to not only rebut Governor Romney’s falsehoods with the passion and aggression he was so heavily criticized for not having two weeks ago, but did so in a setting that calls for much more tact; which Romney did not seem to realize.

The night was filled with moments in which the Governor seemed completely flustered and combative, acting disrespectfully to not only the President of the United States, who at times he looked like he was going to punch, but the moderator, Candy Crowley.  While both candidates ignored the debate rules on occasion, Romney was not only the first to do so, but was more frequent and more hostile.

Not only was Romney’s performance rocky at best, but the content of his responses to the questions asked were continuously void of specifics.  While, he was persistent in reiterating that he “know[s] how to make an economy work” or “what it takes to create jobs again” or “what it takes to balance a budget,” he refused to share with the American people his supposed knowledge.  When asked about how he would go about solving the problem of pay inequality for women in the workforce, the Governor took a page out of the Ryan playbook with an anecdote regarding how he hired women once; and then stated that we need a stronger economy.  While it is great that he hired women, his answer lacked any mention of discrimination, which has existed long before the Great Recession and is the obvious root cause of pay inequity.

One thing did become clear last night, the contempt that the candidates have for one another is more than just a professional rivalry; but it was President Obama that was better able to hide his disdain.  The debates are the best place for Governor Romney to exemplify to the American people that he has the gravitas to be “presidential” and last night’s incessant whining did not do it.