3rd Party Candidates debate tonight (10/23/2012 9pm) on OraTV. Find out what the other 4 major candidates think and see them square off with one another.

Here is the excerpt from Ora TV’s website about tonight’s debate:

Larry King, the host of Larry King Now on Ora TV, will serve as moderator for a special 2012 Presidential debate. This debate will take place on October 23 at 9:00pm EDT at the Hilton Chicago and streamed live on Ora TV.

Larry King, “I have interviewed every US President since Nixon, and lest people forget, I helped usher Ross Perot into the national conversation during the 1992 presidential contest. I appreciate the importance of providing a platform to those with real alternative visions for our country’s future.” 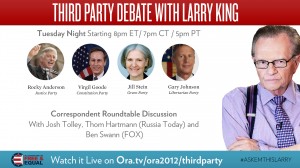