GMU Student Govenrment held the first of a series of “Flash Lectures” on October 17, 2012.  The flash lecture was a debate with an election spin to inform students more about issues.  The debate featured Professor Bryan Caplan and Professor Steven Pearlstein who spoke on the question of “should government withdraw from and active role in providing and subsidizing higher education?” 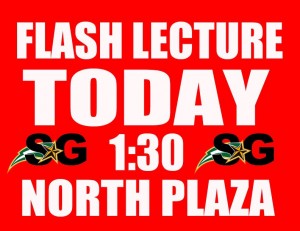