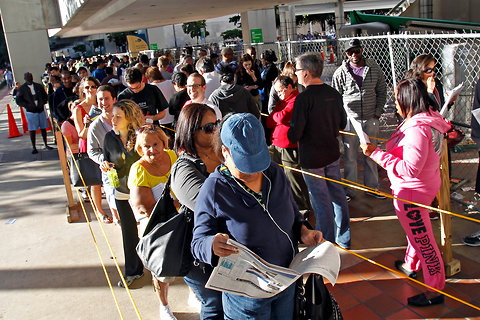 Four days after the US presidential election, Florida’s results have finally been called and Obama has won its 29 electoral votes.  The extended amount of time it took the Sunshine State to determine the results, is indicative of their obviously flawed voting system.

Florida has received much criticism regarding the rules and regulations of their elections in recent years.  The amount of early voting days was cut from 14 to 8, drastically limiting the time people had to cast their ballots and resulting in an increased amount of wait time; discouraging many from voting and forcing others to leave before they had a chance to, due to family or work obligations.

During early voting, people waited in line for hours to cast their ballot.  One location in Miami-Dade County was temporarily shut down because they could not handle the large amount of people that have shown up.  Some had their cars towed while they continued to stand in front of the polling location, refusing to leave until they had the chance to cast their ballot.

Even on Election Day, people waited for extended amounts of time.  Not only were the lines long, but so was the ballot.  In some counties it consisted of 10 pages, and was filled with ballot initiatives written in legalese that many found difficult to comprehend, increasing the amount of time it took to fill it out.  The situation was also not helped by the fact that there were also fewer polling locations than in 2008 due to redistricting and financial constraints.

People continued to wait in line after the election has already been called; a testament to the American people’s determination to live in a free and democratic society.  States hold the responsibility of implementing elections, causing inconsistencies and allowing state politicians to dictate regulations that aid their own personal or party’s agenda, as they are not held accountable to a nonpartisan, higher authority.  This must change before the next election, as it threatens the democracy in which Americans are so rightly, proud of.