Ralph Nader started with an encounter that he had last week.

While walking through DC, he passed a young man. The man, who was in his early twenties, was walking hunched over, his eyes glued to his cell phone, oblivious to his surroundings. Ralph Nader asked him a question.

“Do you ever feel that you are a prisoner of your own smart phone?”

The young man didn’t even look up.

Throughout Ralph Nader’s presentation, this man served as a metaphor for the greater American public, complacent victims of corporate crime, government fraud, poor health care and corrupt politicians. When these issues are brought to the attention of Americans, most people shrug their shoulders like the young man with his cell phone and get back to their lives.

Ralph Nader, a civic activist, spoke at GMU’s Harris Hall on Monday, September 23rd. Nader is responsible for starting and supporting dozens of public activism committees, or PACs, that cover humanitarian, environmental, consumer protection and governmental issues, and he ran for president four times in 1996, 2000, 2004 and 2008 as a write in candidate. Nader initially came to prominence for his efforts to improve the safety of cars.

Nader talked about his first activism campaign when he brought the automobile industry to task for its lack of safety features within its automobiles. Nader was inspired to undertake this campaign by the large number of his friends who had died or suffered severe injuries from car accidents. He began researching safety regulations within the automobile industry while he was in law school and eventually authored a book about his research titled Unsafe at Any Speed.

In his lecture, Nader told the audience that when he first moved to DC to lobby for improved safety standards for cars, he was “all alone.” He learned that in order to implement change within the automobile industry, he had to form an alliance with a senator, find press coverage and make a contact within the white house.

In the beginning, it was hard.

Emphasizing this point, Nader recounted a time when he called a congressman’s office. After introducing himself, the secretary on the other end of the line asked him who he was with.

“At the time, I was standing all by myself in a pay phone!” Nader told the audience. Exasperated, he picked up a nearby dog and held the receiver of the phone to the dog’s mouth. The dog barked. “And that was how I answered the question of who I was with.”

Throughout his speech, Nader encouraged the audience to become politically active. He stressed that the biggest mistake that Americans make is in assuming that they can’t make a difference. Nader told the audience that most major activism movements in the United States started with only one or two people. He encouraged audience members to communicate with each other through local political activism groups, emphasizing how a small group of people spread through every congressional district can effectively influence its representative politicians. He referred to this passion for influencing positive change as having “fire in the belly,” also known by psychologists as emotional intelligence.

Nader provided the audience with a long list of issues that he believes need to be changed within the United States. He wants to provide full health care coverage for everyone, to cut the military’s budget, to hold the “wall street crooks” accountable, to fight pollution and to use solar energy instead of fossil fuels and nuclear power.

A recurring issue throughout the lecture was corporations. Nader stated that multinational corporations control people, that they speculate with employee mutual fund and pension money and that they influence the foreign policy of the United States, even instigating wars. He summed up his feelings by stating that “Corporations are too big to fail.”

Nader is also campaigning to raise the minimum wage, which has not kept up with inflation and the rising standard of living over the past thirty years. Today, the minimum wage is $7.25, although in 1968, the minimum wage was over $10.50 after being adjusted for inflation. More information can be found at Nader’s website, www.timeforaraise.org

For all of his fame and accomplishments, Nader was humble and unassuming in his engagement with his audience. In the Q and A that followed in which audience members voluntarily lined up behind a microphone and asked him questions, Nader gave thoughtful and serious responses to each question.

With several funny moments throughout the two hour session, Nader encouraged his audience to effect political change on issues of importance. By forming activism groups, audience members can find support and collaborate with like minded individuals. When people feel that they have power, they will work to effect change. 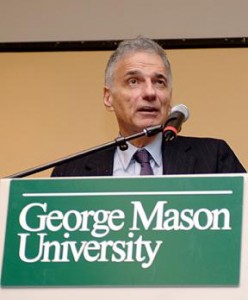