If you were there for Michelle Obama’s visit to Mason on September 17th, you might remember Henry Lopez. If not, bare with me, his story is worth reading. Henry is the lucky student that got to introduce the First Lady of the United States and share his story as undocumented immigrant. So who is Henry Lopez? 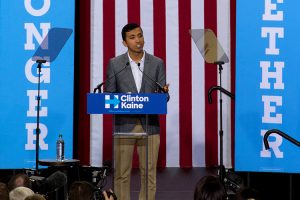 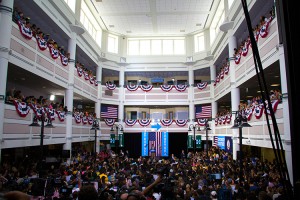 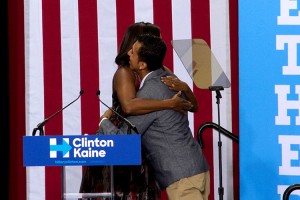 Henry Lopez was born in Guatemala and was brought to the United States by his parents at the age of four. He grew up with his two siblings in Northern Virginia, where he spent seventeen years of his life. Therefore, it is very natural that America is the place he has always called “home”.

He then went to college at Mason, just like his older sister. Allowing their children to pursue college education was always a priority for his parents. Higher education was, for Henry and his family, “the window to what we see when we think about the American Dream.” Henry insists that he would not have had the opportunity to attend Mason without the Obama administration’s action to protect undocumented immigrants. “The opportunity they gave to DREAMers such as myself is tremendous.” So, you can only imagine how much it meant when he got the call that he would be introducing Michelle Obama. 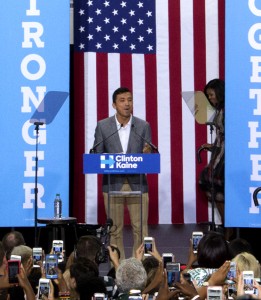 How did than happen? How did Henry end up introducing one of the most important people in the United States? He simply seized the opportunity that was given to him.

When Henry was in high school, he was involved in a mentorship program that helped undocumented students navigate through the college process. That organization was contacted by Hillary Clinton’s campaign in an effort to get more DREAMers to talk about their personal stories. They naturally recommended Henry. And there he was, standing on the stage, delivering a speech and introducing the First Lady of the United States.

I asked what his experience was like meeting Mrs. Obama and what they said to one another. “It was very brief, he said, but she shook my hand. I got the chance to thank her for everything she has done while she thanked me for being here and sharing my story.”

Henry only found out the night before that he was going to speak at an event that attracted over 2,000 students and community members to the Johnson Center Atrium. However, he was prepared after years of public speaking practice in high school and seemed comfortable on stage during the event.

Henry wrote his own speech and “knew what he wanted to say” from the moment he got the campaign’s phone call. “The campaign incorporated some of Hillary Clinton’s educational plans but it was very much my own speech, my story,” he insisted.

To the obvious question — “weren’t you scared?” — we got the not-so-obvious answer: “not at all!” Indeed, Henry explained to us that having to speak in front of the Mason community made things easier for him. “I was extremely honored to introduce her and excited to be there.”

Although he is not affiliated with any political party, Henry takes politics very seriously. He spends his free time trying to get people register to vote here at Mason. “Politics is very important to me because of all the implications of it for the country.”

He says he is confident that Clinton will win, and despite being somewhat concerned by Trump’s success, he is convinced that Trump’s “message is not aligned with what Americans believe”.

Henry’s main message is for students is to “get out there and vote!” As a student who cannot vote, his message could not be more powerful. “In an election where the stakes are completely different and the directions that we can take are so sharp, it is crucial that people register to vote,” he summed up.

As a computer science major, politics is not part of his career plans but, with a story already so powerful, who knows where life can take him?