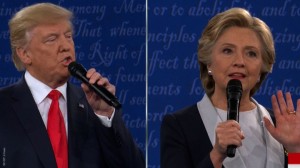 For the second time in two weeks, voters got the chance to witness one-on-one exchanges between the Republican and Democratic nominees. But unlike the first debate’s “opposing podium” format, the second was structured as a town hall where audience members were able to pose questions directly to the candidates.

Both Trump and Clinton were given the opportunity to express their views and plans on various issues ranging from Supreme Court appointments to defeating ISIS, but most of the post-debate analysis and chatter was consumed by discussion of body language and a now-infamous Access Hollywood video from 2005 that revealed Donald Trump making lewd comments about women.

Reporters David Fahrenthold and Katie Zezima summed up the 90-minute spectacle in an article posted online just after the debate: “The second presidential debate veered into ugly territory Sunday night in St. Louis, as the two nominees swapped insults and interruptions.”

How did the Mason community react?

Most of the students we interviewed did watch the debate. It was the first one Cameron was able to watch. He said it “sounded like kindergartners fighting, it was ridiculous” and, with a sour laugh, admitted it made him feel “ashamed of our country.” “Ridiculous” was also the first word that came to Morgan’s mind when asked about Sunday’s night, although she thought it made the debate more “entertaining.” Becca, an English exchange student, had a similar view: “I thought it was a joke. Both candidates are just out to get each other rather than to discuss [the issues].”

Despite those negative reactions, most of our interviewees thought the debates were still important. According to them, debates allow voters to see how candidates can “react to questions” and “interact with one another.” It is a way to make up one’s mind about a candidate while avoiding any bias or influence from the media. Katie thinks that debates are a crucial part of the process insofar as they show “how eloquent the candidate is along with their demeanor under pressure, a situation in which a President often finds himself.” The town hall format also seemed to make a difference. Becca indeed felt it brought an “added bonus” as the audience questions “made the debate more relatable.”

That being said, most students do not seem to have watched the vice presidential debate because, as Katie put it, “they are not the ones running for President.” When asked why they didn’t tune in for the VP showdown, many invoked the “I didn’t have time” excuse. But in general, students were simply more interested in hearing the candidates at the top of ticket speak than their running mates.

We asked students if the debate(s) they watched lived up to their expectations, and the responses were pretty unanimous. “Yes,” they answered, before quickly adding, “because I had really low expectations.” Kristen, who only got to watch the first debate, said it corresponded to what she had been hearing so far in the media. “I knew both candidates’ scandals would be spoken about, and they’d both spend their time attacking the other,” said Becca. Like the others, Katie was somewhat disillusioned, “I didn’t really have any expectations for this debate.”

For Kanako, an international student at Mason, it was her first experience with American presidential elections. Coming from Japan, she thought it was “interesting”, to say the least. “In Japan, politicians are not very honest either,” she admitted. Contrary to short Japanese campaigns, she thinks “lengthy elections in the U.S. give voters the chance to take the time necessary to make their choice.”

Most of the students we interviewed said that these debates did not impact their decision. “I already had a clear idea of who I was going to vote for, and this debate only validated my decision,” Cameron told us.

A number of students seem to be tired of the permanent attacks that have flooded the debates of this campaign. But while the lack of enthusiasm and disillusionment is real, the ones we interviewed haven’t lost faith in politics. The majority actually watched at least one of the debates so far. All of them were registered to vote, and they felt they have a duty to learn about candidates’ stances for themselves.

“Unique” was a recurrent word in students’ mouths. Ultimately we are witnessing one of the most singular political battles in the history of the United States.