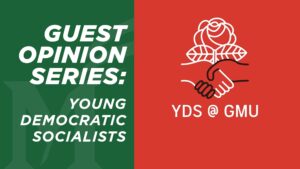 Perhaps the immediate impulse is to ask “what does the dictionary say?” Merriam Webster states that socialism is “any of various economic and political theories advocating collective or governmental ownership and administration of the means of production and distribution of goods.” Wikipedia defines socialism as “a left-wing to far-left economic philosophy and movement encompassing a range of economic systems characterized by the dominance of social ownership of the means of production as opposed to private ownership.” Finally, the American Heritage Dictionary claims socialism is “any of various theories or systems of social organization in which the means of producing and distributing goods is owned collectively or by a centralized government that often plans and controls the economy.”

Now, with this understanding, we can now safely eliminate one thing socialism is not. Socialism is not “when the government does stuff,” as some humour, nor is it the presence of social programs. Whilst, of course, providing social programs certainly has many benefits, such views are not inherently socialist. Far from it. Plenty of capitalist systems incorporate these social programs into their economies, such as those of Finland, Canada, and Germany. In all such cases, ownership over the means of production remains predominantly privatized.

So then what is socialism? Socialism is democracy within the economy. On the small scale, it is the establishment of workers’ councils within each workplace. This allows the workers to advocate for themselves and decide how their workplaces will operate. On the large scale, this means democracy in the way resources are allocated. Rather than the owners of companies or state planners making decisions on how to run the economy, such decisions are left up to the entirety of the population to decide. This is the authentic socialism that we must work towards today.

But then, one may ask “what does socialism look like?” That is an easy question to answer. Imagine how your workplace would function without managers or executives. The ones calling the shots are not some far away oligarchs, but instead you and your peers. Perhaps every week you all come together to discuss and vote on changes to workplace policy, human resources problems, and preparing for upcoming projects or plans. Perhaps it is not as formal, perhaps it is managed instead through spontaneous, informal discussions that are decided by consensus. Perhaps there are alternative models, though regardless the foundational principles are the same. The people directing the workplace are the same as those who produce within it, and those very people are the ones appropriate the value of the work being done.

Under socialism the workers’ status as a worker is mitigated. They are not a cog in a machine that does a set task for a price so that another may profit. Instead they are freely cooperating individuals. One cannot perform all of the labor necessary to produce what is needed for society to function, so they collaborate. In order to ensure they are properly respected, they are placed upon the even playing field of democracy. No individual ownership is involved, like there is under capitalism, because it necessarily requires collective efforts to produce. Therefore, to respect the humanity and equality of all participants, they all cooperatively control the workplace.

It is this future that socialism envisions. Instead of a world where an individual or state can dictatorially proclaim ownership and supremacy over people’s labor, it is the people themselves who become masters of their work. No longer will there be alienation between the worker and their creation, for there will be no middleman to extract profits out of their efforts. Thus, those who work are rewarded for their time and energy by having the power to decide how the workplace functions, how they would like to be compensated for their work, and how the fruits of their labor ought to be distributed.

Similarly, the entirety of the people will find a new power in their hands: the power to control the economy itself. Already, the ruling capitalist class uses its considerable influence to aid itself through tax cuts, exponentially increasing police and military funding, and forcing the working class to fund bailouts and investments into itself. Thus, when the people seize power over the economy, they too shall have the ability to advocate for themselves. The distinction lies in the inherently different interests of the people and the ruling class. Whilst the latter prefers to selfishly gorge itself for the purpose of ever increasing its wealth and power, the latter’s interest lies in advancing the will of itself, that of the people. Democratic control over the economy would result in improved social programs, repairing and constructing new infrastructure, as well as benefits to ensure that everyone is able to live in as much comfort as realistically possible. At long last, the will of the overwhelming economic majority will be enacted and a new sea of prosperity will wash away the filth of inequality and exploitation. Like a swirling storm, the flames of hatred and alienation will be subdued. Thus, as the old adage proclaims, “workers of the world, unite! You have nothing to lose but your chains!”

Learn more about the YDSA via Mason360: mason360.gmu.edu/gmuydsa/home