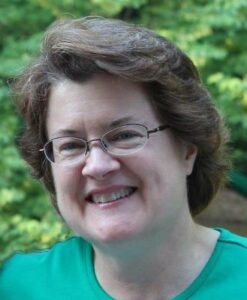 Mason student Jean Thoensen has served as a Fairfax County election officer for the past eight years and is pursuing a bachelor’s degree in public administration with a minor in government analytics. Photo courtesy of: Jean Thoensen

Jean Thoensen started working as an election officer because a neighbor invited her to. The next year, she took over from that neighbor as chief election officer. Eight years later, she is finally leaving her precinct. She’s been promoted, and agreed to sit down with Mason Votes to describe her new position and what she’s learned along the way.

A self-described “life-long college student,” the 60-year-old Thoensen is getting her bachelor’s in public administration with a minor in government analytics at Mason. She says that even after eight years as an election official, she’s still learning a lot from her classes, and that only increases her passion for voting.

“I am far more aware of the stratification of our society and how barriers were put in place to keep certain groups of people from voting,” Thoensen said in an email. “That has only strengthened my resolve to support the widest possible access to voting. Mason professors are always gracious about allowing me 10 minutes to speak in class each fall about voter registration and early voting/absentee voting by mail.”

This year, anyone registered to vote in Virginia can vote early if they want to, no excuse or approval needed. In-person early voting lasts until Saturday, October 30th. The number of early voting locations and their hours have expanded this year (fairfaxcounty.gov/elections/early-voting).

However, Thoensen predicts that the voter experience on Election Day will be “pretty much the same as it was last year.”

Click here to learn more about early voting in 2021 >

On Election Day, voters will be able to both vote in-person and drop off completed mail ballots. Those voting in person will need to check in with their full name, residential address and some form of photo ID.

“Virginia greatly expanded the IDs that are valid for voting in 2020,” Thoensen said in an email. “In fact, a Mason student or employee [photo] ID is valid for voting! If they don’t have any ID with them, they can sign an ID confirmation statement, which is a legal affirmation that they are who they say they are, and vote normally.”

Thoensen served as chief election official for her precinct in Centreville, VA through the 2021 primary elections. She has also worked at a number of early polling locations. This November, she is working as a “rover,” someone who helps at multiple locations, rather than staying at one all day. They also test and configure voting machines, taking crucial security and documentation actions every step of the way.

A poll worker’s day starts at 5:00 am, and doesn’t end until they’ve prepared a statement of results and shut down the polling station after voting closes at 7:00pm, often a two-hour process. Rovers will be on hand to solve any problems all of the stations along their assigned routes have at any point during this minimum 16-hour day.

“I work some grueling hours and am nearly ready to drop from exhaustion, but it is worth it to see as many people vote as possible, regardless of their political affiliation. Fairfax County has the best run elections office in the state, [in my honest opinion],” Thoensen said in an email.