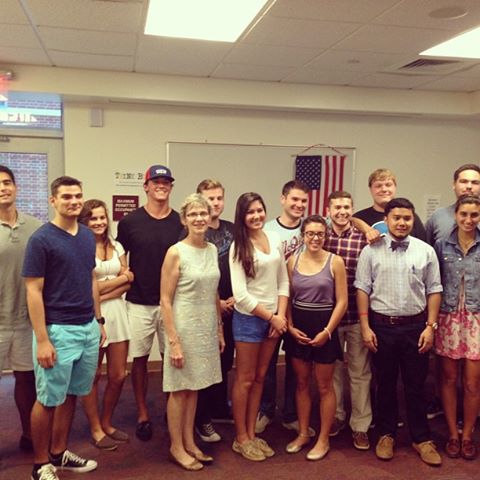 On September 11, 2013 the College Republicans on Campus had their first meeting of the year. The new Executive Board for the year consist of Chairman Joe Caldarera, Vice Chairman Alex Colorado, 2nd Vice Chairman Devon Flynn and Treasurer Kyle Roll. Information about the meeting was provided by Caldarera who noted that at the meeting Patrice Winter, a candidate for State Delegate in George Mason’s District was the guest speaker. The meeting started on a solemn note when Caldarera lead the organization in prayer for those who were killed in the attacks on 9/11 and then was followed by a moment of silence to remember the troops fighting over seas. The meeting then proceeded with a speaker from Ken Cuccinelli the Republican candidate for Virginia’s Governor campaign and then Ms. Winter’s made her apperance as the College Republicans endorsed her. Other things that were discussed at the meeting were the plans for the organization for the semester as well as a discussion on Syria. All the memebers that were present at the meeting were opposed to bombing Syria.

For more information about the College Republicans you can contact: