February 24, 2016 — At the first Democratic student debate, discussing the potential of a Hillary Clinton or Bernie Sanders White House administration, student participants tried to wedge their opposition on how a politician should be held accountable for their past deeds, and whether the past can be an accurate reflection of what they might do in office.

In a nomination race that will come down to the wire, any differences between two liberal thinkers will in reality be a small leap in policy terms, but played out as if crossing a canyon. 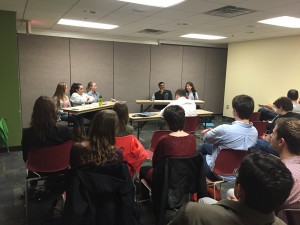 Patriots for Bernie Sanders (left) and Patriots for Hillary Clinton (right) face off in debate while representing their hopeful party nominees.

Much of the economic discussion within the Democratic Party has come from how a Sanders administration would usher in an era of democratic socialism in America, and the Patriots for Bernie representatives were quick to define this. Rather than being a destabilising force to the United States, Sanders will look to solve the systematic inequalities by restoring wealth to those who need it, protecting the environment, and fixing a corrupt and racist justice system.

But for Patriots for Hillary, offering their candidate’s humble background as the representation of America, what was missing was the rational arguments as to how this fiscal agenda could be fulfilled. While the argument for a financial speculation tax on Wall Street – one where investors will be charged for financial transactions as a repayment for the 2008 bail-out – could create economic redistribution, particularly to fund public college education, Team Hillary quickly pointed out that any decision to tax investors would work against the average American and their 401k accounts.

However, it seemed unusual that Patriots for Hillary had such a staunch defence of the virtues of America’s banking system. Without a doubt their actions caused much of the hurt to individuals and families during the financial crisis, and while “the banks can’t be blamed for capitalism”, an argument offered in the debate, Patriots for Bernie countered suggesting that the banks have to realize their involvement and take most of the responsibility. While Sanders has been defined by many as a socialist, the clear ire of his student supporters at government intervention in the capitalist system is perhaps the truest free-market position.

Turning to foreign policy, the political actions of both candidates in the recent conflicts throughout the Middle East were examined. It was clear that Patriots for Hillary found this a comfortable topic of conversation, given the natural passion that their representative has shown for world affairs. With a key role of the President defined as their ability to be a world diplomat, they promoted Clinton’s experience, especially in her role as Secretary of State. When subjected to the possibility that Clinton’s experience in foreign affairs was more to her detriment than a redeeming feature, Patriots for Hillary argued that her failings in Benghazi were due to systemic error, and that her support for drone warfare, while still a harsh solution, was effective at protecting American troops.

But rather than argue that their candidate was better because he had more experience, the Patriots for Bernie camp instead pushed the point that when it came to foreign policy, a person with a calm head and good judgement was always the better option. Using examples of Bernie’s Senate voting record, particularly his non-support of the Iraq War, the team showed that sometimes the best action was no action, citing the US intervention in the Middle East being responsible for the formation of ISIS.

Missing the opportunity to point out this simplification of Arabic politics, Patriots for Hillary instead pushed that there cannot be a revision of history, and that their candidate would be the best at dealing with the situation moving forward.

Ultimately the two sides of the debate framed their candidates as the woman who was grounded in the realities of office, with her experience at every level of government as her source, against a man who has dared to dream and set his mission above what most people expect him to be able to do. Despite heated moments throughout, this clearly showed the passion of students who want the best for their country, and will share their views to any ears that will listen in order to achieve something greater than themselves.