FAIRFAX, VA — In her first solo appearance on behalf of Democratic presidential nominee Hillary Clinton, First Lady Michelle Obama delivered an impassioned speech at George Mason University that highlighted the stakes of Election 2016 and implored young voters to make it to the polls on November 8th despite the increasingly negative tone of the campaign in recent weeks.

“We can’t afford to be tired or turned off — not now. Because while this might feel like a time of uncertainty and division, I have never felt more hopeful about the future of this great nation.”

On the choice that faces Virginians when they step into the booth this November, Mrs. Obama pointed out the slim margins that helped her husband carry the Commonwealth in 2012: “Which candidate’s words and actions speak to the future we want for our country and the values we share — values like inclusion and opportunity, service and sacrifice for others? Your answers to these questions on Election Day will determine who sits in the Oval Office after Barack Obama. And let’s be clear: Elections aren’t just about who votes, but who doesn’t vote. And that is especially true for young people like all of you. In fact, in 2012, voters under the age of 30 provided the margin of victory for Barack in four key battleground states:  Pennsylvania, Ohio, Florida, and right here in Virginia. Without those votes, Barack would have lost those states, and he definitely would have lost that election — period, end of story. ”

Addressing the news cycle’s hot topic du jour, “birtherism,” Mrs. Obama deployed one of the most memorable lines from her much-lauded speech at the Democratic National Convention this past July: “There were those who questioned — and continued to question for the past eight years, up through this very day — whether my husband was even born in this country. [Boos] I think Barack has answered those questions with the example he’s set — by going high when they go low.”

While it is expected that any high-profile surrogate for a major party’s presidential candidate will make an affirmative case for their candidate, Mrs. Obama went a step further, saying she is “inspired by Hillary.”

“We need someone who’s compassionate, who’s unifying force, someone who will be a role model for our kids; someone who’s not just in this for themselves, but for the good of this country.”

“I know in my heart that we deserve a president who can see those truths in us, a president who believes that each of us is part of the American story and we’re always stronger together.”

Wrapping up a well-received appearance in front of a capacity crowd in Mason’s Johnson Center, Mrs. Obama expressed confidence in Democrats’ chances at keeping in the Oval Office:

“I have never been more confident that Hillary Clinton will be that president. So here’s what I’m pledging. From now until November, I’m going to work as hard as I can to make sure that Hillary and Tim Kaine win this election. I need your help to do that. You got to get to work, make it happen. Virginia will make the difference in this election. Are you ready, Virginia?” 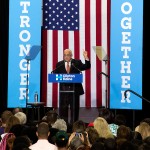 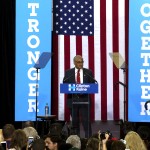 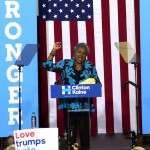 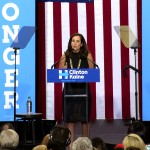 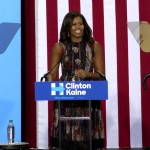 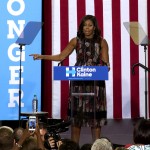 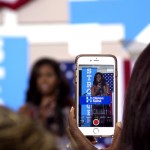 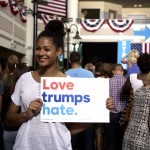 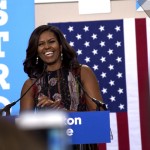 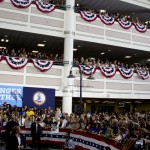 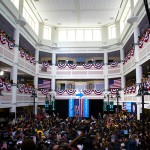 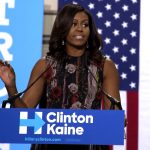