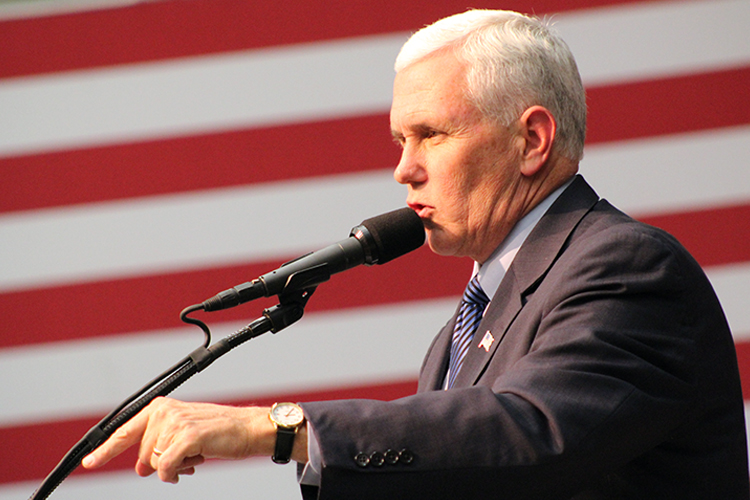 In a last-minute effort to turn Northern Virginia red, Indiana Governor and Republican vice presidential candidate Mike Pence gave a unifying speech to hundreds of supporters gathered in the Hub Ballroom on Mason’s Fairfax campus this past Saturday.

The rally started off with the campaign’s Virginia chairman who introduced pastor Leon Benjamin. Benjamin set the tone for the night, calling on “Christian believers and prayer warriors” to pray “for victory on November 8th,” and called upon God to “save America.”

After several introductory speakers and inspirational songs on repeat (lyrics included “it’s gonna be a long, long time,” “I was born free,” “unknown stranger,” and “you can’t always get what you want”), Mike Pence appeared on stage with his wife and daughter, Karen and Charlotte Pence. “I am a Christian conservative and a Republican,” he began. 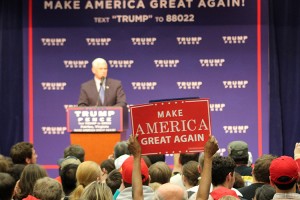 Pence spoke for about an hour to a cheerful and reactive audience, tackling the main points of Donald Trump’s platform – security, jobs, immigration and the Supreme Court. The pro-life agenda, free markets, lower taxes, and religious values were just a few of the issues highlighted by the governor.

“This election is about big things,” he said, referring to the potential to name multiple Supreme Court appointees, claiming “it is a decision that must be made by Donald Trump as the next President.”

Pence’s speech was meant to be a unifying and decisive closing argument in a swing state that could prove critical to the party’s success: “We’ve got work to do in Virginia and we’ve got three days to do it. That man, this team, this movement are ready, so make sure Virginia is ready.”

In an effort to shore up the support of those long-time Republicans that have begun to defect in recent weeks, the Governor concluded his remarks saying he’d “like to speak to [his] fellow Republicans and tell them it’s time to come home.”

That being said, the beginning of the speech – and more than a third of it – was dedicated to Hillary Clinton’s failures and lack of accountability. “No one is above the law,” he said, as the crowed shouted, “lock her up!” “Let’s not forget what we already know,” he went on, listing his campaign’s accusations against Clinton and pointing out her alleged conflicts of interests. “Shame on her,” the crowd responded.

On Clinton’s platform: “Going through the same measures and expecting different results, it’s insanity. We are going to [implement] some common sense Republican conservative values.”

Against Clinton’s candidacy: “We must ensure, here and now, in the great state of Virginia, that Hillary Clinton will never be elected President of the United States of America.”

After the event, supporters were more than satisfied. “It was wonderful, solid, grounded… It was great! He gets better and better,” said Beth Baron, a strong Trump supporter. 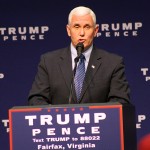 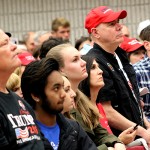 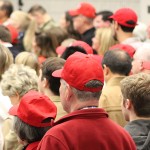 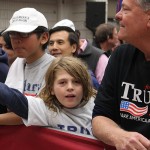 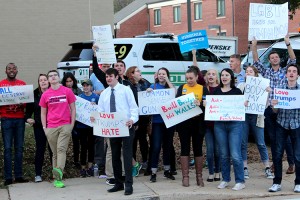 Pence’s appearance drew a group of protestors holding signs reading “My Body, My Choice,” “Build Bridges, Not Walls,” and the now-famous Clinton refrain, “Love Trumps Hate” outside The Hub.

Two hours before the event was scheduled to start, protestors led by the Mason Democrats gathered near the entrance of the venue amid a sea of Trump/Pence supporters sporting the famous red “Make America Great Again” hats frequently worn by their candidate. Their protest lasted throughout the rally and could be heard sporadically from inside the event.

Alex Hanon was part of the protest group: “The point is to say that we have to love each other and that there is only one candidate that is love in this election,” he said holding the now-famous “love trumps hate” sign. Hanon and the other protestors made it clear that they were not seeking “confrontation.” 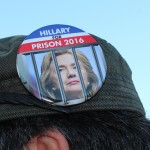 A Trump supporter’s button suggests Hillary Clinton should be imprisoned.

As the crowd of supporters and protestors grew, both groups were responding to each other with chants and rallying cries. Kayla Schultz is not a member of Mason Democrats, but she joined the protesters to advocate for pro-choice policies, as her “My Body, My Choice” sign made clear. “Confrontation and violence are scary, she said, some people came talking to me, I felt uncomfortable.”

Susan Merdler traveled to Mason from Fredericksburg to see Mike Pence speak after attending two of  Trump’s previous rallies. As a veteran, national security is the main reason why she is supporting the Republican nominee. “I can’t stand that Hillary Clinton lied under oath. Trump never did that,” she said. Lying under oath seemed to be a concern for a great number of Trump supporters we spoke with and Pence mentioned it during his speech. “I have a master degree and I support Trump thousand percent. I hope that students attend and that minds can be changed tonight,” she concluded enthusiastically. 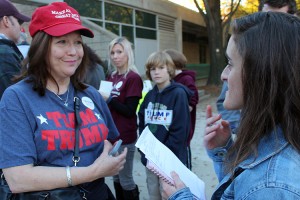 Alec Vaca came with his parents to the rally. After having watched past Trump events on YouTube, it was an opportunity for him to finally attend a live event. “We have been supporting Donald Trump since the beginning. We need to protect our borders and Christian values,” they told us. However, they were not members of the Republican Party, they insisted, a party they thought had done “bad things as well.” Alec’s parents are Bolivians, they have been in the US for 25 years now. Trump’s position on immigration is more a solution than a problem for them. “We have to try. We have to at least do something. Illegal immigrants are going to go back to their country and they’ll eventually come back,” said Alec’s mother Carminia.

Anna Weber was one of the few Mason students attending the rally that we met – they seemed to be a minority on Saturday night. Anna had never been to a political rally before but was there to support Mike Pence and Donald Trump. She originally supported another candidate but rallied to Donald Trump after the primaries in order to stand for “the protection of the core values” she believes in. As a young woman, we wanted to get her thoughts on the infamous Access Hollywood tape that sparked controversy before the final debate. “It’s all talk, I think action speaks louder than words.”

Constantine Provost was also at the event. Coming from Latvia, this 14-year-old student had arrived in the U.S. only two months ago. “I have been supporting him since the first debate. He is great, he’ll build a great wall,” he told us. As an immigrant, Constantine also insisted on the important distinction “between legal and illegal immigration.”

For Dr. El Tinay the speech was “successful, uplifting, well-organized and substantive.” As a former leader of the May 68 (a French anti-establishment leftist movement), international relations teacher, and supporter of Barrack Obama, he demonstrates the far-reaching appeal of Donald Trump’s platform and the Republicans’ best hope for winning on Tuesday: crossover support from the Democratic party.