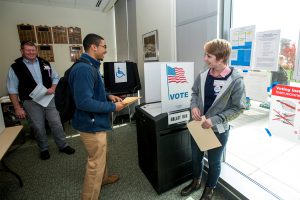 One way to do your part to make sure that the 2020 election goes as smoothly as possible is to become a poll worker.

A well-staffed polling place is less likely to experience long lines on Election Day, helping more people vote by reducing barriers to participation. Research from past elections indicates that long lines at the polls tend to impact lower-income and minority voters the most, as well those who live in areas with a high population density. One 2017 study found that “in predominantly minority communities, the lines are about twice as long as in predominantly white ones.”

With COVID-19 continuing to wreak havoc on communities across the country, local election officials are eager to recruit young poll workers after experiencing a drop-off in participation among older election volunteers during recent primaries. High school and college students who don’t fall into the high-risk categories for COVID-19 (elderly Americans and those with preexisting conditions) are being actively recruited by groups like Power to the Polls and the Poll Hero Project to “step up and serve their country” this November.

Volunteers are always welcome, but many poll workers are paid for their time (including in Fairfax County).

Learn how to become an election officer in Fairfax County: fairfaxcounty.gov/elections/officers/new-officers

Search by state to learn more about becoming a poll worker in your community: eac.gov/help-america-vote