Students describe how they felt after watching Donald Trump and Joe Biden go head-to-head during the debate on Sept. 29 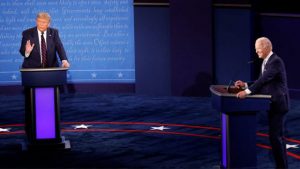 Democratic presidential nominee Joe Biden and Republican President Donald Trump faced off in the first presidential debate of the 2020 election in Cleveland, Ohio on Sept. 29, with “Fox News Sunday” anchor Chris Wallace moderating the event. Throughout the debate, the two candidates interrupted each other, bickered on issues beyond the time limit and chaotically exchanged viewpoints.

The topics addressed included the Supreme Court, the candidates’ records, COVID-19, the economy, the climate and the integrity of the election.

Students watching the debate expressed their opinions on what happened. Global Affairs sophomore Shreya Dandu stated that like many other people, she thought that the debate was a big mess.

“To me, I felt like I was watching two people continuously fight and interrupt each other [rather] than watch[ing] people talk about their agendas,” Dandu said. “All I can remember were the insults and interruptions thrown at each other rather than actual policy proposals.”

Dandu said that Trump should have stopped interrupting and insulting Biden and Wallace.

“Regardless of who you support, I think that Trump insulting Biden’s sons was just way out of hand,” Dandu said. “There are certain lines you just can’t cross, and I just couldn’t help but think that was extremely unpresidential of him. His outright refusal to denounce white supremacy also speaks volumes to me.”

Dandu said that Biden could have given more concrete answers on his topics.

“While I am planning on voting for him, I noticed he dodged questions about packing the court,” Dandu said. “While I understand he didn’t answer because he doesn’t want to cause more divisions within the Democratic party and that he doesn’t want to alienate voters, I think that people should know where he stands on that issue.”

“In all honesty, I thought the debate was a complete mess in terms of policy implications, respectability, and everything in-between,” Moallin said. “The entire time I felt overstimulated with jabs coming from both Biden and Trump and even Wallace, that I wasn’t even aware of what the topic was during the conversation. I don’t think this is a left or right issue. In my opinion, there was no way that was informational.”

“It seems as though Trump and Biden were butting heads the entire time to look more superior, that they forgot the main reason they were on stage in the first place,” Moallin said.

“There is no more looking away and being undecided,” Moallin said. “Most people who were watching the debate were not using the debate as an indicator of who to vote for, most already knew. The more and more polarized American politics become, the less of a chance a middle ground will ever be reached.”

“I think the nature of politics has changed dramatically because the United States has become extremely polarized, and there is evident lack of communication and respect that goes deeper than politics,” Gutierrez said. “More people feel the need to defend their values and beliefs [and] that usually comes out hostile.”

Wallace stated to CNN that he “wishes he had stepped in more seriously sooner” to avoid the fallout.

“That was frustrating,” Wallace stated in a CNN article. “It was frustrating for me because I tried hard to prepare for a serious debate, much more frustrating and more importantly for the American people because they didn’t get the debate they wanted that they deserved.”

Wallace also stated in a CNN article that he believes Trump was the primary cause of the turmoil. According to The Washington Post noted that, Trump repeatedly interrupted Biden and Wallace, attacked Biden’s son Hunter, refused to condemn white supremacy and presented doubts on the legitimacy of the ballots.

“I had baked this beautiful, delicious cake and then frankly the President put his foot in it,” Wallace said to CNN.

This article appears on Mason Votes with the permission of the editors of Fourth Estate.