Redistricting Reform on the 2020 Ballot in Virginia 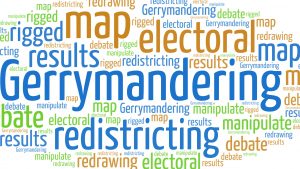 Featured on the Virginia ballot for tomorrow’s general election is a proposed amendment to the state’s constitution that would create a bipartisan redistricting panel.

The proposed amendment on the Virginia ballot reads as follows:

In basic terms, the proposed amendment is attempting to create a more bipartisan process for the drawing and approval of election districts. If the law were to pass, the new bipartisan commission in charge of outlining election districts would consist of 16 individuals, 8 Virginia citizens and 8 General Assembly members.

The new amendment would also require equal representation among the General Assembly members appointed to the commission, with an equal number of individuals from both the state Senate and House of Delegates and an equal number of members from each political party.

Under the proposed amendment, the redistricting committee would submit their plans to be approved by the General Assembly. However, if the election redistricting plans are not submitted and approved within a certain timeframe, the responsibility of drawing the election districts would fall to the Supreme Court of Virginia.

Currently, the responsibility of outlining election districts falls to the General Assembly and the Governor, therefore whichever party holds the majority can modify the districts in their favor. Because many believe the current process gives too much power to the majority party, inclusion of these redistricting changes on the Virginia ballot stems from an effort to decrease unfair gerrymandering from both political parties. The supporters of this amendment also want to allow citizens to take an active role in the redistricting process.

According to an article from The Washington Post, “The proposed amendment was advanced by Republicans last year when they were the legislature’s majority party and has caused a rift among Democrats, who are now in control of the General Assembly.” Virginia State Democrats are against the implementation of this amendment as they now hold the majority, and this has led to criticism about being hypocritical. Although Virginia State Democrats oppose the amendment as well as most of the Democrats in the House, “nine Democrats in the House and all but two in the Senate joined Republicans in supporting the amendment”

The amendment also faces opposition from members of the Virginia Legislative Black Caucus, as they emphasize “that the amendment does not require diverse representation on the commission and does not incorporate language from the federal Voting Rights Act laying out guidelines for racial equity”. The Virginia State Conference of the NAACP echoes this concern and officially announced their opposition in late September.

Whether the amendment passes or not is up to the voters, but according to a January 2020 Mason-Dixon poll, 72% of Virginia voters support the proposed amendment and the creation of a bipartisan redistricting commission.

In a recent article from Quartz, The Princeton Gerrymandering Project along with other voting rights organizations endorsed the amendment stating, “Passage of the Virginia amendment would be an unmistakable sign that reform is viable in Virginia, viable in the South, and viable in the rest of the country.”

If this amendment does end up passing and being implemented there will be increased citizen involvement in the redistricting process, and it will be harder to influence political gerrymandering. However, many different individuals and organizations have made valid arguments on potential negative points to this amendment, which could lead it to be less effective in preventing the unfair gerrymandering it set out to diminish.