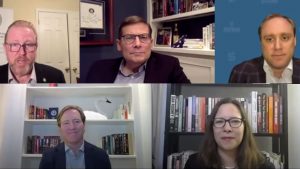 With Election Day coming up in November, voters all around the United States are casting their early ballots and, more importantly, asking the question of “Will my vote count?” To address this question, General Michael V. Hayden of the Michael V. Hayden Center for Intelligence, Policy and International Security invited Christopher Krebs of the Department of Homeland Security, Laura Rosenberger of the Alliance for Securing Democracy and Dimitri Alperovitch of Silverado Policy Accelerator for a session on Oct. 12 to discuss foreign interference in the 2020 presidential election and the steps that are being taken to ensure the protection of votes.

Rosenberger began the discussion by outlining several dimensions of potential foreign interference in the election, with the first dimension being cyber operations.

“Cyber operations are aimed at either weaponizing information, as we saw through the Hack of League Operations that Larry mentioned that Dimitri and his team at Crowdstrike were so important in helping contribute and investigate in 2016, to influencing public opinion or distorting public discourse around the election conversation,” Rosenberger said.

Rosenberger explained that another dimension that has received a lot of attention recently is the information operations predominately run by social media, which distorts information using both covert and overt means.

“This is often referred to in the 2016 context predominantly through the operations of the Internet Research Agency, also known as ‘troll farm’ as people would shorthand it,” Rosenberger said.

The last dimension that Rosenberger described, which has been discussed the least, is the covert use of financial and non-financial resources to influence the course of a campaign or an election.

“There is evidence that foreign actors have used those tactics in dozens of countries around the world, and we probably haven’t spent enough time dealing with that particular pathway to interfering in the election,” Rosenberger said.

Krebs expressed the idea that foreign interference tends to focus on the election infrastructure itself, including the systems involved in getting a voter through the process to vote.

“You have seen the U.S. government take a series of actions over the past several weeks and months, targeting and trying to get in front of some of this activity and sanctions,” Krebs said.

Compared to the 2016 presidential election, Krebs believes that the level of foreign activity in this election is “dramatically different.”

“In 2016, it was quite clear, both through signals intelligence as well as on-networks instant responses through forensic activity, that the Russians were very active in hitting the election networks, whether it was in Illinois or Florida,” Krebs said. “At this point, we are not seeing that same level of high-stakes coordinated campaign targeting our election infrastructure, but that is not to say that there is no activity.”

Alperovitch expressed a similar reaction and explained that he is feeling positive about the upcoming election.

Rosenberger explained that a concerning part of this election is the amplification of domestic voices in the information operations space.

“When we have domestic political actors or domestic voices in general, those opinions and those statements are First Amendment protected,” Rosenberger said. “When we have foreign actors that are amplifying either divisive content or content from domestic actors that are aiming to cast out on the integrity of elections, that complicates the ability to defend.”

Rosenberger explained that a possible solution to foreign government interference is the ability of the U.S. government to be more creative and clear about what they are trying to accomplish.

“If what you are trying to accomplish is seeking to delegitimize other governments for its own ends rather than defending the institutions of democracy around the world, that leads you down one pathway,” Rosenberger said. “But if what you are trying to do is to defend democratic values and democratic institutions, that leads you down a different pathway in terms of the offensive tools you may pull out of your toolkit.”