How Donald Trump Earned My Vote 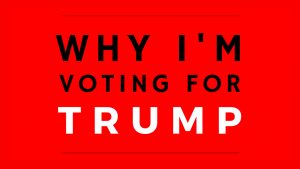 I grew up in a conservative household where I learned to value hard work, personal responsibility, inherent value of the individual, and respect for God and country. I remember arguing against proponents of Donald Trump as he ran in the primaries. After he won, I refused to vote for him, going against the pressure from my friends and family. I wasn’t going to vote for Hillary Clinton — I simply refused to fall into the trap of voting for someone that I didn’t believe in. So I decided to take the moral high ground and boycott the system.

I clearly remember when that changed. The election was called at about midnight in California time. That was the first time the thought crossed my mind that Trump not only could be president, but that he was my president. Since then, my three objections have fallen like dominos.

His conservative accomplishments are quite numerous, but some which greatly stand out to me are the judges he’s nominated, the tax cuts, record-breaking economic prosperity, America becoming a net energy exporter for the first time since 1952, exiting the Paris Climate Accord, eliminating the leader of ISIS and removing the Affordable Care Act’s individual mandate, just to name a few.

But he has two big accomplishments that stand out the most: He has exposed the failures of liberal media and destroyed the credibility of the Democratic Party establishment. The Democratic Party did everything they could to deny him the election, obstruct his agenda, remove him by impeachment and smear him endlessly. Up to this point, they have predominantly failed.

The most frequent grievance I hear is with his personality. It’s true, he does have his petty, rude, obnoxious, thoughtless and childish moments. Yet I do believe that it’s what America deserves.

Many yearn for a politician who is a standard-bearer for decency. Joe Biden promises to “restore the soul of our nation,” but that is where he is dead wrong. Politicians do not restore souls, and if you think they do, you are deceiving yourself. They are reflections of who we are.  If we look hard in the mirror, we are an immoral, petty, chauvinistic society, and changing our politicians won’t change that. People in positions of power are a symptom, not a cause, of society’s moral failings.

The way I see it, the biggest difference between Donald Trump and Joe Biden is that Trump will be explicit about what’s really happening, whereas Biden is experienced at playing political games to hide unflattering realities.

It feels like I’m watching my beloved country be torn apart. On one side, I see my family, faith, culture and principles. On the other, I see the liberal media, political and cultural elites, and academia. The only thing standing in their way is the president. Some have argued that Biden will defend my conservative values, but the fact is, Biden is a product of the political elites; he’s a creation of the very forces out to annihilate what I value.  “Nice guys” like Mitt Romney are not who I want standing in the way of these people. I want a warrior to champion and defend my cause. That flawed warrior, I believe, is Donald Trump, and I am proud to vote for him on Nov. 3.

Fourth Estate Editor’s note: This piece is part of an Election Day special. Click here to read staff writer Savannah Martincic explain why she is voting for Democrat Joe Biden.