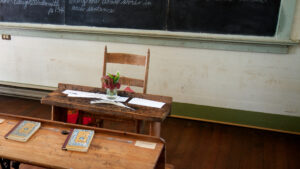 Even though it’s not taught in Virginia schools, critical race theory became a central theme of the 2021 campaign. Photo by: Rob Shenk (CC BY-SA 2.0)

Among the many national issues that have dominated news outlets and social media platforms in recent months is the topic of public education. Usually a local point of focus, education became a top issue in the 2021 elections, coming up in forums small and large (in counties across the country, as well as in national debates).

Notably, education was a major concern for voters in the November 2nd gubernatorial election in Virginia, a race narrowly won by Republican Glenn Youngkin.

During a September debate, Youngkin’s Democratic opponent, former Governor Terry McAuliffe, said, “I don’t think parents should be telling schools what they should teach,” referencing a recurring dynamic in the American education system where parents have successfully sought to ban  literature they deem offensive from being taught in schools.

Youngkin capitalized on McAuliffe’s “gaffe” to discredit his opponent and portray him as unfit to handle problems in the arena of public education. Then-candidate Youngkin focused his campaign on a reverse sentiment, that of giving parents “a lot” of control when it came to what their children were taught in school. McAuliffe’s line, which many viewed as clumsy, was emphasized repeatedly by the Youngkin campaign and seemed to gain traction in the final months of the election.

A recent NPR article noted a shift in polls conducted by The Washington Post and Mason’s own Schar School as Virginia voters began to focus on the education issue: “Between September and October polls, education rose 9 points to be the top issue for voters going into the race, according to a Washington Post-Schar School poll.”

Another factor impacting voter focus on the issue of public education was “critical race theory” (CRT). According to Encyclopedia Britannica, critical race theory is an “intellectual and social movement and loosely organized framework of legal analysis based on the premise that race is not a natural, biologically grounded feature of physically distinct subgroups of human beings but a socially constructed (culturally invented) category that is used to oppress and exploit people of color.” (In internet vernacular, it can best be described as a “trending” topic in the current socio-political climate.)

CRT theorists and scholars hold that “racism is inherent in the law and legal institutions of the United States insofar as they function to create and maintain social, economic, and political inequalities between whites and nonwhites, especially African Americans.” This academic premise has often been described, without proper context, analysis, or even accurate definition, as a potentially harmful and even racist point of view by many conservatives.

Some have gone on the offense in regard to what they believe is CRT, decrying it in the media and in some instances, even staging demonstrations to “keep CRT out of schools.” Like former President Trump, Youngkin incorporated negative perceptions of CRT into his political rhetoric on the campaign trail. (Youngkin received the former president’s endorsement.)

Indeed, Youngkin turned CRT and its purported potential harm into a campaign fulcrum. His plan to oppose its implementation in schools became one of the central themes of his campaign for governor. (CRT is not something that is actually taught in Virginia’s public schools.)

A recent Fox News article underscored Youngkin’s stance on CRT and education: “Youngkin, in contrast, has taken the side of parents who have been pushing back against curriculums featuring critical race theory.”

Stephen Sawchuk, Associate Editor of Education Week, puts CRT into greater context, delineating how this academic theory has been drastically misunderstood and misrepresented in modern America, weaponized by politicians, and used in tandem with the topic of education to influence the votes of many conservatives and parents: “The charge that schools are indoctrinating students in a harmful theory or political mindset is a longstanding one, historians note. CRT appears to be the latest salvo in this ongoing debate.”

Sawchuk’s article highlights how recent debate over the country’s long history of slavery, racism, and segregation, with developments like the New York Times’ 1619 Project as well as the Black Lives Matter movement, enhances a kind of latent “anxiety” in the country’s culture, stemming from a serious shift in social power dynamics: “It’s because they’re nervous about broad social things, but they’re talking in the language of school and school curriculum,” said one historian of education. “That’s the vocabulary, but the actual grammar is anxiety about shifting social power relations.”

During his last year in office, the former president branded CRT as a radical and harmful set of ideas. Around the same time, he also ended racial-sensitivity training in the federal work sphere.

Bans on teaching CRT in several Republican-led states (in reality, nearly any curriculum that explores entrenched racism in America and its real-world effects), coupled with the former president’s refusal to acknowledge the role of racism in American society, revealed a sad and troubling irony: the view held by CRT scholars that “racism is inherent in the law and legal institutions of the United States” was unfortunately, and concretely, validated.