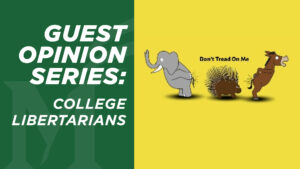 What is a Libertarian? “I’ve heard of them, I just don’t know what they stand for.” “Librarian? Y’all having a party now?” “Something about Alex Jones.” “Hey, you’re with the Aleppo guy. I remember that!” “I’ve seen you guys on the ballot. What do you all believe in?”

These are some of the responses I get when tabling on campuses for College Libertarians. Very simply, a Libertarian is someone who wants to live in peace and prosperity, and wants the same for everyone else, too. This rests on the Non-Aggression Principle, which, much like the Golden Rule, asserts as long as individuals refrain from violence, coercion, or fraud, they should be free to pursue their ends without external constraint. What differentiates Libertarians from the two old parties is: 1) Democrats want to raid your wallet or purse, but allow you social freedoms. 2) Republicans want to be the boss of your bedroom, but allow you economic freedoms. (3) Libertarians want you to keep your money, and not mind your personal affairs. Libertarians seek a world in which people are viewed as autonomous individuals seeking to live fulfilling lives through choice in how they work, who they love, and where they choose to live and learn.

This also applies to foreign policy. Libertarians seek, as Thomas Jefferson put it, “peace, commerce, and honest friendship—entangling alliances with none.” The point is, the government should treat its citizens like the competent adults they are.

When I see folks tabling for the R’s or D’s, they don’t need to explain themselves. Everyone already knows what they stand for, or claim to stand for. While both major parties have switched ideologies over the centuries, virtually every voter can be assured of one thing when either a Republican or Democrat is elected: more violence, more rights violations, more taxes, and more evisceration of hard-fought freedoms. Over 150 years of Republicans and Democrats in office has demonstrated over and over that neither party cares about Americans and their dreams, their ideals, and their future. The reason why people know what R’s and D’s stand for, but may not know what Libertarians stand for, is because R’s and D’s have rigged the electoral system such that hardly anyone but R’s and D’s can get on the ballot. The government doesn’t like competition.

But that’s exactly what Libertarians provide: a third option, and in national politics, the most viable third option on the ballot. In 2016, Libertarians received 3.27% of the popular vote for President, while the Green Party received about 1%. Sure, 3% may not sound like much, but what it implies is that Libertarians had three times more support than the fourth largest party in the U.S. The difference in proportionality was nearly the same in 2020. That’s why if Americans truly want to break the duopoly (politically, an abusive relationship), their best bet is to vote Libertarian, the third-party candidate most likely to succeed. We have competition in the marketplace (no one, except Bernie Sanders, would tell you 14 brands of deodorant is too much), so why not in the ballot box?

The Libertarian Party of Northern Virginia is fortunate to have ballot access at this time. Third parties can lose ballot access (meaning, their candidates get dropped from the ballot) if they don’t reach a certain voter percentage within a set number of years. Once those requirements are close to being met, the government raises the bar higher to ensure third party and independent candidates do not stay on the ballot. While various states allow write-in options for candidates that are not listed, in many instances those write in candidates are not counted and added into the totals unless they meet certain criteria before election day. These criteria are often put in place by Republicans and Democrats to ensure no third party or independent candidate gets on the ballot or is counted properly in vote totals. The Libertarian Party is fighting tirelessly against these onerous restrictions and regulations that are, effectively, censoring dissenting voices across the United States.

Why are Republicans and Democrats so powerful when they barely represent a majority of voters? Let’s look at some numbers. Most surveys show about one-quarter of U.S. voters are registered as Republican (or self-identify as Republican in states that do not register voters by party), about one-third are registered or self-identify as Democrats, and about two-fifths are registered as independent or no party. Combined, the percentages for R’s and D’s come out to about 58% of all registered voters; more than half, but not two-thirds. Third party registrations, including Libertarian, make up about 5% of the total.

Founded in December, 1971 in Colorado, the Libertarian Party is the only political party that wants you to be able to have your cake and eat it too. No longer do you have to choose between more social freedoms (D’s) or more economic freedoms (R’s). A vote for Libertarians is a vote for both. Libertarians want polyamorous LGBT married couples to be able to homeschool their adopted children while self-employed, protecting their marijuana plants with AK-47’s. This example humors folks, and I’m glad it does, but it’s to make a point: Libertarians are the only party fighting for all your freedoms all of the time.

As you head to the polls, or fill out your mail-in ballot, consider the history of the last 150 years of Democratic and Republican tyranny. Both parties supported the death penalty, drafting young men to fight a war they did not believe in, stealing money (through taxes) they did not earn to give to their friends in Big Government and Big Business, in civil asset forfeiture in which the police can seize whatever you own, in forcing people of different backgrounds and ethnicities to live and work separately. Both parties, at one time or another, supported all of these terrible rights violations. The Libertarian Party is the only party that stands for peace, freedom, individual rights and privacy in all aspects of your life.

To learn more about the Libertarian Party of Northern Virginia, check out www.lpnova.org