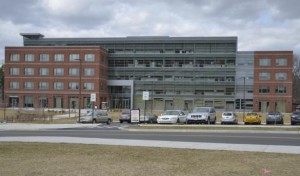 Photo of University Hall, where the University precinct is located, taken one day following the election. (Jake McLernon)

Ron Paul won the new University precinct on Super Tuesday with a total of only 22 votes.

Mitt Romney, who was declared the state-wide Virginia winner on Wednesday, received 10 votes in the precinct in which registered on-campus students can cast their ballot. The two GOP rivals were the only candidates on the March 6 ballot.

“We’re very ecstatic about the results [of Paul winning],” said Sonia Jeffers, events coordinator for Mason’s Youth for Ron Paul group. “We can see how much his popularity and message has spread.”

Prior to Tuesday’s vote, Youth for Ron Paul helped organize advertising and carpooling to get students to Springfield, VA for the Feb. 29 Ron Paul “Leap Day” rally. The group also worked with Mason’s College Republicans to register voters on campus and set up a kiosk in Johnson Center to hand out pocket Constitutions and Ron Paul fact sheets, according to Jeffers.

But Jeffers was surprised by the overall turnout.

A lack of awareness of the University precinct among on-campus residents, according to some in the Mason community, could have been a factor.

Approximately 6,000 students live on-campus who would be eligible to vote at the precinct’s polling location in University Hall, as long as they are registered at their campus address. The rest of the university’s 33,320 students include a majority commuter population whose precincts would differ based on where they reside. Additionally, a portion of the campus’s residents, could have voted absentee and mailed in their ballot.

Jeffers, who said she hadn’t been politically active until her involvement with Youth for Ron Paul this year, didn’t know about the on-campus precinct until Election Day.

“I had no idea [the University precinct] existed,” said Jeffers. “I was surprised because I didn’t know there was a polling location on campus.”

Tuesday’s primary is the second time ballots have been cast in the University precinct. Established in summer 2011, the precinct was first functional for the Nov. 8 general election, where 76 ballots were cast.

A commuter student herself, Jeffers voted off-campus near her home and said she hoped that other students who didn’t vote on-campus had cast absentee ballots or voted at off-campus precincts. She said she also heard of at least four students who tried to vote at the University precinct but were unable to meet eligibility requirements.

Darren Kessler, a junior at Mason, said he didn’t vote on Tuesday at least In part because he couldn’t identify a candidate that he really liked.

“There’s not really a candidate that stands out that I like,” said Kessler. “[But the vote total] is kind of a crazy thing to hear.”

College of Health and Human Services Professor Naomi Gerber said she notices a big difference between students’ political engagement during this year’s election cycle versus 2008.

“Many [faculty members] have talked at the water cooler about the difference between now and four years ago,” said Gerber. “I walk around and I don’t see fliers or kiosks opening.”

In addition to a lack of student activity, no GOP candidate, in a field which also includes former Senator Rick Santorum and former House Speaker Newt Gingrich, has held a rally on campus since the election cycle began. Obama, the Democrat incumbent in November’s general election, last held a large event at Mason in the spring of 2010 addressing students on his health care initiative.

Although Jeffers said Paul’s rally in nearby Springfield drew great support —around 2,000 attendees according to reports—she hoped Paul would come to the Fairfax campus and speak at the Patriot Center where more students and community members might attend.

“We were trying really hard to get him to campus,” said Jeffers.

Former Massachusetts Governor Mitt Romney, who holds the most delegates in the GOP field, came to Fairfax in late October. His rally, less than a mile from Mason’s main campus, was held to support Virginia state legislators prior to the Nov. 8 general election.

Calling voter turnout at the University precinct “pathetic,” Gerber said she is concerned because she considers the issue of engagement an important one.

A Maryland resident, Gerber said she recently received an email from a Maryland campaign person who was attempting to gather Marylanders to help “stimulate” voter registration in Virginia. She said this might suggest that voting apathy is a statewide issue.

“It seems like Virginia has been identified as a place where a lot of people don’t vote,” said Gerber, who added that she would love to see campus enthusiasm return to where it was in 2008 when both Democratic candidates, Senator Hillary Clinton and then-Senator Barack Obama, came to Mason’s campus prior to the election.

“There was so much energy and enthusiasm,” Gerber said. “It was palpable.”

This article was originally published on 3/9/2012 on Connect2Mason, George Mason University’s student online news source. It is by Adam Sylvain, C2M Managing Editor. The photo is of University Hall and is by Jake McLernon.