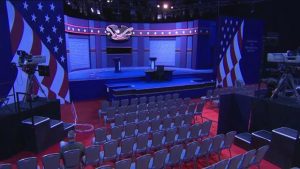 A lot has changed since September 29th when Trump and Biden faced off in the first presidential debate of the 2020 election. (One Mason student described that event as “the most aggressive presidential debate” they had ever seen).

Just three days after that now-historic debate, President Trump announced that he and First Lady Melania had both tested positive for COVID-19.

Trump’s late night Twitter disclosure prompted many to question the wisdom of hosting subsequent debates as planned, citing potential threats to public health and concerns about the safety of those participating.

The Commission on Presidential Debates has officially cancelled the second presidential debate after a failed attempt to pivot to a virtual format, but the only 2020 Vice Presidential Debate continued as scheduled and in person on Wednesday, October 7th in Salt Lake City, Utah.

Plexiglass dividers, a mask-wearing requirement for all attendees, and a new 12-foot distance requirement between the two candidates on stage all made it impossible for the American people to ignore the novel coronavirus’ association with the White House and the Trump-Pence ticket.

USA Today’s Susan Page served as moderator and addressed the issue within the first few minutes of the debate, asking both candidates to explain how their respective administrations would handle the pandemic.

Senator Kamala Harris (D-CA) took the opportunity to discuss what she thinks the Trump administration did wrong in their approach to dealing with the virus, saying that “the American people have witnessed what is the greatest failure of any presidential administration in the history of our country.”

Mike Pence rebutted Harris’ claim, bringing up the success of the president’s travel ban to China early on in the pandemic and accusing democrats of opposing his decisive action: “President Donald Trump has put the health of Americans first.”

Moderator Page emphasized the need for civil discussion early on, but a pattern of Harris criticizing the Trump administration and Pence defending it quickly emerged, with polarizing attacks and subtle hostility on display throughout the 90-minute debate.

Mclaney noted the differences in style between Trump and his running mate: “Pence is more practiced in political speech and remains more reserved, while Trump is more disruptive in a non-professional and rambunctious manner.”

Mason student and secretary of the GMU Republicans student organization, Joe Szymanski, said he thought that the vice presidential debate focused more on “policy instead of personality” by putting key issues on the table, including climate change, healthcare, abortion, and foreign policy.

Something many Americans look for from a vice presidential debate is any potential differences in policy between the presidential candidate and their VP pick.

“For Biden and Harris, there’s quite a number of issues the two don’t fully agree on,” said Mclaney, but “Trump and Pence share a significant number of policy positions, which was bound to have played a part in Pence’s selection as VP.” Szymanski stated that he “doubts there are any” issues that Trump and his VP pick disagree on.

So who won the 2020 VP debate? The answer varies based on who you ask…

Szymanski commented that the debate was “was extremely close. Both really did bring their A game. But I had to give the edge to Vice President Pence. [He] just controlled the messaging a little better.”

Mclaney said, “I think that Kamala won the debate because she’s able to hit back, especially with her one-liners. She was also able to navigate a debate with an interrupting and dismissive man-splainer, one that we as women are too familiar with, with her head held high.”

Another mason student who preferred to remain anonymous agreed that the debate was very close: “I don’t think this debate had a clear winner and loser, both candidates argued their points well and it really came down to policy differences.”

The debate closed with a question from an 8th grader named Brecklynn who asked: “If our leaders can’t get along, how are the citizens supposed to get along?”

Although this could be viewed as a naïve question from a young person, it was also on the mind of many Mason students contacted during reporting for this article.

One Mason student who requested anonymity summed up the thoughts of many: “[I’m] disappointed by the behavior of both candidates for letting differences get in the way of discussing how to actually help Americans.”