An overview of Mike Pence’s career in the House of Representatives, as the 50th Governor of Indiana, and 48th Vice President of the United States 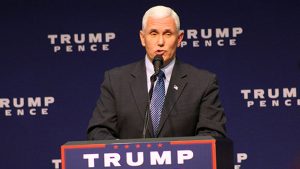 Mike Pence’s decades-long political career began in 2001, when he became congressman in the U.S. House of Representatives, serving the constituency of Indiana’s 2nd congressional district from 2001 to 2003, and then the state’s 6th district from 2003 to 2013.

He proved himself to be a capable, dedicated member of the Grand Old Party, and in 2005 was named the head of the Republican Study Committee. In 2009, Pence was elected Republican Conference chairman, the third-highest leadership position in the Republican Congressional spectrum.

Acting on his deep-rooted conservative beliefs throughout his time in Congress, he supported decisions that would reduce government spending and lower taxes, and would strengthen state and local governments. At the same time, he accrued criticism for his support of proposed cutbacks to Planned Parenthood, an organization that provides health care and educational resources for people diagnosed with sexually transmitted diseases. One reason for this was Pence’s opposition to needle exchange programs, a proven method in the prevention of AIDS and Hepatitis C.

Pence’s conservative convictions would continue to color his work during his time as the 50th Governor of Indiana. His dedication to fiscally responsible action remained a central component of his platform, as he signed into law the largest tax cut in Indiana’s history and helped to direct funds toward improvements in education infrastructure.

At the same, however, he advanced legislature that alienated him from his more moderate Republican colleagues. A bill on abortion restriction signed by Pence in 2016, which would deny abortion in situations where the fetus displayed signs of disability, was deemed unconstitutional two years ago, and his work on the Religious Freedom Restoration Act (RFRA), approved in 2015, was amended shortly after becoming law (the added changes explicitly prohibited acts of discrimination on the basis of sexual orientation and gender identity).

Supporters of the RFRA maintain that the bill’s purpose is to support the unrestricted exercise of religious beliefs, while opponents cited Pence’s strong homophobic views and the religiously conservative slant that underscored the bill.

Pence withdrew from his re-election bid for Governor of Indiana in July of 2016, when then-Presidential candidate Donald Trump announced him as his official VP pick.

Trump’s decision was a calculated move on the part of the Trump campaign, as Pence had the benefit of decades-long political experience, long-standing in-party connections, and the support of various donors, including conservative Christian groups, which would in turn bolster Trump’s chances and increase his voting base.

It was clear that Pence and Trump did not have the same moral perspective on every major issue on their platform, but Trump praised his running mate on Twitter as a man of “honor, character, and honesty,” and Pence has since aligned himself with a number of Trump’s major policy plans, such as the immigration ban on primarily Muslim nations, the campaign to construct a wall on the Mexican border, and the general conservative stance against Roe v. Wade and women’s reproductive rights.

A consistent facet of their professional relationship has seen Pence either vocally defend the President’s policies and behavior, or implicitly support him throughout the past four years.

During his tenure as Vice President, Pence cast the tie-breaking vote in the confirmation of Betsy DeVos for Secretary of Education (a move that was highly criticized by Democrats and people in the field of education, who cited DeVos’ overwhelming lack of experience for the job), and was appointed head of the White House COVID-19 task force, during which time he reinforced the Trump administration’s goal of reopening the country’s schools and businesses by the beginning of April—a plan that was cautioned against by several of the nation’s leading healthcare professionals.

Look back at Mason Votes’ coverage of then-candidate Mike Pence’s campaign rally at Mason during the 2016 election: masonvotes.gmu.edu/2016/11/08/mike-pence-campaigns-at-mason