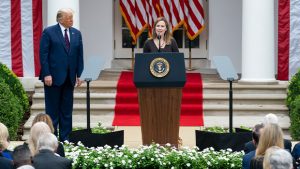 Here are the top 5 highlights you need to know from the first day of hearings:

COVID-19 loomed large over the hearing

The ongoing coronavirus panemic shaped this into a confirmation hearing unlike any we have ever seen. Mask wearing was prominently on display, with senators keeping their masks on even after the hearing started. Judge Barrett also wore her mask the entire time she was being questioned. One Republican senator who tested positive for the virus, Mike Lee (R-Utah), attended in person after being cleared by his doctor, with multiple senators worried of infection or risk of transmission joining by video call. Judiciary Committee chairman Lindsey Graham (R-SC) addressed senators and guests fears of potential COVID-19 risks that he doubted “there is any room in the country that’s been given more attention and detail to make sure its CDC compliant.”

Democrats focus on the ACA

Senate Judiciary Committee Democrats made their main arguments for the day surrounding the Affordable Care Act (Obamacare). The Supreme Court is set to hear arguments next month on November 10 in a case that could potentially overturn this legislation, potentially leaving millions without health insurance or coverage for pre-existing conditions. Many of the Democrats invoked stories and personal responses from their constituents about the importance of the ACA, as well as how it impacted their lives, referencing everything from cataract surgery to prescription drugs.

Judge Barrett emphasized the importance of the courts maintaining neutrality and not engaging in policy making, stating that “the policy decisions and value judgements of government must be made by the political branches elected by and accountable to the people.” In explaining her position further, she invoked the ideology of the late Justice Scalia in saying that “a judge must apply the law as written not as the judge wishes it were. Sometimes that approach meant reaching results he did not like.” This has been a very heated issue, even before this nominee process began. With many Americans concerned about the fate of Roe v. Wade, and marriage equality, both of which have been decided by the court, as well as the ACA in its hearing next month, all eyes are on Judge Barrett to hold to these values and respect precedent.

With worries over the upcoming election mounting every day, Judiciary Committee member Senator Richard Blumenthal (D-CT) pressed Judge Barrett, that if confirmed, “you must recuse yourself” from any election related cases. He said that refusing to could “do explosive and enduring harm to the courts legitimacy and to your own credibility.” These comments come as many Americans are casting absentee (mail in) ballots for the upcoming election, which could lead to delays in results and even potential recounts.

The Supreme Court will determine how policies and laws are interpreted, with the decision and their consequences lasting potentially generations. In the more short-term future, the Supreme Court could have to intervene in the upcoming election and make decisions on things like recounts, extensions, and deadlines for absentee (mail in) ballots.

To tune in and watch the hearings live, check C-SPAN.org