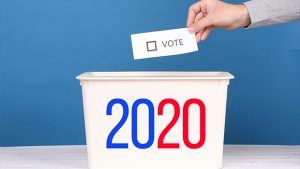 Photo by Marco Verch/wuestenigel (CC BY 2.0)

The election is not 19 days away…the election is now. Every day, hundreds of thousands of Americans send in their absentee ballots or vote early at their local registrar’s office.

As November 3rd rapidly approaches, it is important that voters mentally prepare themselves for an election night without a clear winner. Media organizations usually have enough information to declare a winner on election night based on actual ballots counted and projections (estimates) of outstanding ballots yet to be counted. But the unusual circumstance of conducting a national election during a global pandemic may mean that Americans have to wait days, or even weeks, before a clear winner emerges.

Some states prohibit counting of early or mail-in votes before Election Day, and the deadline for returning mail-in ballots varies by state, making an accurate and complete national count on election night all but impossible. For example, mail-in ballots in Virginia must be postmarked by Tuesday, November 3rd and received no later than noon on Friday, November 6th. Ohio is accepting ballots up to ten days after Election Day, as long as they were postmarked by Monday, November 2nd.

This means that clear results will not be known for at least a few days. With no obvious winner, it can be expected that misinformation will spread in abundance, leading to potential legal challenges by the campaigns and prompting citizens to question the integrity of the election.

We have already seen efforts by the Trump administration to undermine election integrity in the minds of voters by by instituting major mail processing and delivery changes at the United States Postal Service. New leadership, new procedures, and misleading tweets have all been used to foster doubt about the reliability of mail-in ballots.

While platforms such as Facebook and Twitter have taken precautions in an attempt to prevent election misinformation, there is still a lot of misleading content slipping through the cracks.

To some degree, partisan noise and misinformation is unavoidable, but here are a few steps Patriots can take to potentially help reduce the confusion and questions on election night:

Early voting is taking place at all local registrar offices in Virginia until October 31st, the Sunday before election day. Virginia’s officials made the decision to open voting as early as September 18th, giving citizens the option to vote up to 45 days in advance. No form is needed when showing up to the registrars’ office, just a valid photo ID.

Vote from the safety of your own home by requesting an absentee ballot before the deadline of Friday, October 23rd at 5pm. Make sure to follow all instructions and return your ballot before the deadline! You can find more information in a recent Mason Votes article titled “Make a Plan to Vote,” that has links to request a ballot, track your ballot, and some tips for voting in-person on election day.

If you are not high risk and would prefer to vote in person, wear a mask and show up to the polls as if it were any other election but be sure to expect long lines. All that is needed is a valid photo ID. And patience!

While this election night will be unlike any other, we all have the power to make sure our vote is counted and avoid distraction by staying informed.

Make your voice heard by voting in Election 2020 using the method that is best for you!

Read our student Guide to Voting for early vote locations, deadlines, and links to request a ballot.