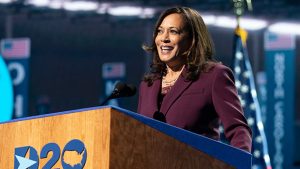 Senator Kamala Harris Accepts the Nomination for Vice President of the Democratic Party at the 2020 DNC. Biden for President Photo by Lawrence Jackson (CC BY-NC-SA 2.0)

Senator Kamala Harris’ career in public service began in 1990 when, following her admittance to the California State Bar Association, she became Deputy District Attorney of Alameda County. Within ten years’ time, she became chief of its Community and Neighborhood Division and later helped establish the state’s first Bureau of Children’s Justice.

In 2003, she won the election for San Francisco District Attorney’s office, defeating her former boss and incumbent Terence Hallinan. She continued to assert a structural influence on her community, with initiatives like the “Back on Track” program, which worked to assist low-level offenders with job training and educational resources.

During the 2004 shooting death of police officer Isaac Espinoza, Harris was urged by Senator Dianne Feinstein and Oakland mayor Jerry Brown, among others, to shift her stance and call for capital punishment, but she refused. This choice reflected a campaign promise, as she held the view that a life sentence, without the possibility of parole, was a more cost-effective mode of punishment.

November of 2010 saw Harris rise further up in the criminal justice system and attain the position of California’s Attorney General, becoming the first woman and the first African American to fulfill this role. Her tenure during this time was marked by a strong stance against inequity, whether it was fighting against unfair mortgage practices, where she helped win a settlement that exceeded an earlier proposed amount, or her work against anti-LGBT legislation, including California’s Proposition 8, which sought to institute a ban on same-sex marriage. (Following the Supreme Court’s invalidation of Prop 8 in 2013, Harris officiated California’s first same-sex marriage since the bill’s initial ratification in November of 2008.)

Harris continued to build her reputation by defending climate change legislation, the Affordable Care Act (Obamacare), and by helping to prosecute those responsible for transnational human trafficking.

In 2016, Harris made the transition from criminal justice to U.S. Senate, becoming the second African American woman and the first South Asian American to hold the position. Her congressional assignments have included the Homeland Security and Governmental Affairs Committee, the Select Committee on Intelligence, the Committee on the Judiciary, and the Committee on Budget. Her legislative work has been highlighted by a focus on financial relief during the rise in housing costs, defending the single-payer healthcare system, and her ardent questioning of then-Attorney General Jeff Sessions in connection to suspected collusion between President Trump’s associates and Russia. She also participated in the Kavanaugh confirmation hearings in 2018.

In January of 2019, Harris announced her candidacy for President. During the Democratic debates, she clashed with Joe Biden on his legislative history (specifically, federal busing) and had to defend herself against those participants who criticized aspects of her professional record during her time as attorney general. Due in part to low polling numbers, Harris withdrew her bid for president in December, and a few months later endorsed Biden.

When it became clear that Biden was the Democratic Party’s presumptive nominee, his campaign began zeroing in on a running mate.

Biden’s generally moderate stance on several major issues needed a counterpart who could help him gain momentum with younger, more liberal voters, and bolster his platform among women and minority groups. Eventually, it was announced that Senator Harris was Biden’s official choice for VP. He cited her legislative and criminal justice background and her reputation of fighting for “the little guy” as some of the major reasons behind his choice.

Senator Harris is now the first African American woman and person of South Asian heritage to be nominated for national office by a major political party. She is also only the fourth woman in U.S. history to run in a major party’s bid for Oval Office.