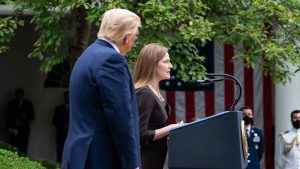 On Tuesday, October 13th, Supreme Court Nominee Amy Coney Barrett sat for the second day of hearings in front of the Senate Judiciary Committee for over eleven hours, portraying herself as an independent judge lacking an agenda.

Here are some important highlights from day two’s hearings:

Judge Barrett declines to clarify stance on Roe vs. Wade

Similar to previous nominees hearings, Barrett refused to discuss her stance on specific cases citing the “Ginsburg rule.” When asked if she thinks the landmark case Roe vs. Wade should be overturned, she declined to answer. She also emphasized “I’ve made no commitment to anyone about how I would decide any case,” and that she would bring her originality and perspective to the role if confirmed, despite the perception that she shares former Justice Scalia’s opposition to Roe. (In the Rose Garden ceremony announcing Barret’s nomination she praised her mentor Scalia saying, “his judicial philosophy is mine too.”)

Judge Barrett apologizes for her phrasing of LGBTQ+ rights

After Senator Mazie Hirono of Hawaii stated the term is often used by anti-gay activists to justify their belief that one’s sexual orientation does not require legal protections as they suggest it is a choice, Judge Barrett later apologized for her remarks. She clarified saying, “I certainly did not mean and would never mean to use a term that would cause any offense in the L.G.B.T.Q. community,” Judge Barrett said. “So if I did, I greatly apologize for that.”

When asked how she as an originalist views racism, Judge Barrett stated “it is an entirely uncontroversial and obvious statement” that “racism persists in our country.” When pressed to further elaborate, after being directly asked, “Yes or no question, do you believe that there is implicit racial bias in the criminal justice system?” Judge Barrett acknowledged that with a criminal justice system as large as the United State’s it is unlikely to not have some implicit bias in it.

The top two Democratic arguments for reproductive rights and healthcare were the center of the proceedings when Senator Kamala Harris asked Judge Barrett for a “yes or no answer” if she was made aware prior to her nomination of President Trump’s promises to nominate judges who would seek to nullify the current healthcare law. In response, Judge Barrett continued her answering pattern stating, “I want to be very, very careful…I’m under oath.”

A law professor at Notre Dame, Judge Barrett was questioned about a public letter about 90 of her colleagues wrote to her stating “it is vital that you issue a public statement calling for a halt to your nomination process until after the November presidential election.” and giving three primary reasons. The full letter can be found here.

Senator Cory Booker of New Jersey acknowledged the letter saying, “They wrote an impassioned letter for the sake of our democracy, publicly writing that you withdraw from this nomination process and have it be halted… this is not normal.”

While Judge Barrett did partially follow the precedent of other nominees, these hearings are a crucial opportunity for the American people to learn about the next potential future Supreme Court Justice and how her appointment directly affects their daily lives. By declining to give clear answers on specific cases such as Roe vs. Wade, The Affordable Care Act, and possible election intervention by the Supreme Court itself (see Bush v Gore), Judge Barrett’s refusal to answer key questions has the potential to impact the integrity of the election in the minds of the American people.

As the election looms closer and closer (just 18 days away), it is becoming more and more apparent just how abnormal this election is.

Read the Mason Votes recap of Day 1 of the Barrett hearings here: masonvotes.gmu.edu/2020/10/14/senate-hearing-for-supreme-court-nominee-amy-coney-barrett/