The Vice President and the People 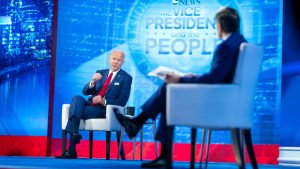 With less than three weeks until the election, the Commission on Presidential Debates announced that the second presidential debate was canceled after a failed attempt to continue with the event in a virtual format following Donald Trump’s positive COVID-19 diagnosis earlier this month. In lieu of the originally planned debate featuring both candidates, Joe Biden participated in a solo town hall event in Philadelphia and spoke with potential voters about his plans and policies.

Biden dove right into policies his administration would implement if elected, answering the first question about how he would handle the COVID-19 pandemic by emphasizing the importance of mask mandates at local and state levels: “I go to every governor, I go to every mayor, I go to every councilman, I go to every local official, say, mandate the mask.” Biden also explained how he would prioritize preparation for schools and business to be able to better handle the spread of the virus and avoid another economic shut down.

One unanswered question from Biden was a clear stance on court packing. The former vice president addressed this issue by explaining that his stance will depend on what happens in the Senate with the nomination of judge Amy Coney Barrett. It is currently still unknown exactly how the Barrett hearings will resolve, but Biden stated that he will give a clear position on this issue before election day: “They do have a right to know where I stand. And they will have a right to know where I stand before they vote.”

Environmental policy is an issue that many Americans are concerned about and will continue to be a topic of discussion long after this election has come and gone. The vice president’s approach to environmental policy would push for investments in renewable energy sources: “…by the year 2035 we’ll be able to have net zero emissions of carbon from the creation of energy.” Biden said that as president, he would invest $600 billion into “made-in-America” infrastructure that would focus on clean and renewable energy and create good-paying jobs along the way.

Throughout his campaign, Biden has continually insisted that he will not ban fracking and does not endorse all aspects of the Green New Deal. Stephanopoulos pressed Biden on how his plan would not ban fracking but end fossil fuel emissions: “The New Green Deal calls for elimination of all non-renewable energy by 2030. You can’t get there. You’re going to need to be able to transition, George, to be able to transition to get to the place where we invest in new technologies that allow us to do things that get us to a place where we get to net zero emission, including in agriculture. I’ve laid out a detailed plan.”

Throughout the evening Biden stressed his desire to foster unity in the nation under his administration. “I’m running as a proud Democrat, but I’m going to be an American president. I’m going to take care of those that voted against me as well as those who voted for me, for real. That’s what presidents do. We’ve got to heal this nation, because we have the greatest opportunity of any country in the world to own the 21st century. And we can’t do it divided.”