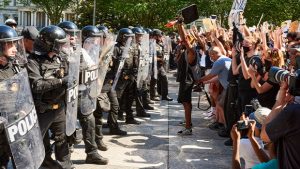 Protesters take the Black Lives Matter cause to Capitol Hill on and the White House on a second day of DC protests against the police brutality in the death of George Floyd. Photo by Geoff Livingston (CC BY-NC-ND 2.0)

There is no doubt that political engagement has increased this year. We have seen citizens from all races, ages, genders, and backgrounds become politically active, especially teenagers and young adults.

It began when COVID-19 reached the United States and shut downs to protect public health took over our lives. Millions across the country were forced to quarantine and cease normal activities.

For months, Americans sat at home with little to do and minimal outside interaction. But the political awakening didn’t stop, and social media allowed young people to connect and express their views despite the pandemic.

Our nation was already experiencing a dark time, but the combination of isolation at home and social issues motivated people to become politically active for the first time.

Ahmaud Arbery was shot and killed in his neighborhood in a non-police altercation in Brunswick, Georgia on February 23rd.

Breonna Taylor was at home in Louisville, Kentucky when she was shot and killed during a police raid that turned violent on March 13th.

George Floyd was killed during an encounter with local law enforcement in Minneapolis, Minnesota on May 25th, sparking social media outrage that led to protests across the country and riots in major cities.

Jacob Blake was shot by police in Kenosha, Wisconsin on August 23rd.

Just days after George Floyd was killed, thousands (eventually millions) took to the streets in a COVID-19 world, protesting and advocating for justice. However, some of the protests led to violence and over 14,000 were arrested.

While around only 7% of the protests turned violent, looting, rioting, and civil disturbance led to an estimated two billion dollars in damages.

Do the protests themselves account for recent spikes in violent crime, or is the “Ferguson Effect,” where police disengage and decrease enforcement as a reaction to community backlash, to blame? And if so, are voters swayed one way or another as a result?

Many have tried to cast violent protests in the wake of George Floyd’s death as the sole cause for increases in murder and assault rates over the summer. This lines up with President Trump’s stance on “law and order,” however it may not have a real connection.

According to a recent Vox article, there may not be actual correlation between the spike in crime and the protests, even the violent ones.

Although President Trump trails in the polls, many suggest that the unrest and violence associated with protesters will be an advantage to him as calls for defunding the police and violence in the streets has the potential to push voters for conservative candidates.

On the other hand, recent events have sparked a national voter registration movement to get as many people registered to vote as possible.

No one knows exactly which social forces will prevail on Election Day, but every American has a chance to voice their opinion by voting on (or before) November 3, 2020.