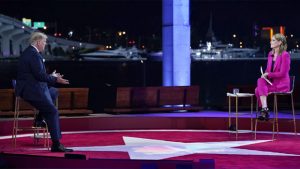 On October 15th, we were supposed to witness the second of three planned presidential debates. However, after failed attempt to continue with the event in a virtual format, both candidates set up dueling town hall events at the same time on different networks. While former Vice President Joe Biden participated in a town hall on ABC, President Trump appeared on NBC.

The town hall opened up with a discussion of President Trump’s health, as he recently contracted COVID-19. Trump stated that he took Regeneron’s antibody drug, and that he was feeling better just days after he contracted the virus. Guthrie asked about the frequency of his COVID testing routine, but Trump was unsure if he was tested on the day of the debate in Cleveland, Ohio. “Possibly I did, possibly I didn’t. But the doctor has very accurate information,” he said, redirecting Guthrie to his doctors for official records and insisting that he takes “a lot of tests.”

President Trump was also questioned about the so-called “superspreader event” hosted at the White House on September 26th to announce the Supreme Court nomination of Amy Coney Barrett: “I’m President. I have to see people. I can’t be in a basement, I can’t be in a room, I have to be out.” Guthrie responded saying “You can see people with a mask though, right?” President Trump said, “I can, but people with masks are catching it all the time.”

President Trump then referred to Virginia Governor Ralph Northam who “was known for a mask,” but still contracted COVID-19.

The first question from voters attending the town hall event came from Jacqueline Lugo, an Independent who voted for Hillary Clinton in 2016 and was leaning towards voting for Biden. She asked, “If you knew COVID-19 as you told Bob Woodward in February was airborne and deadlier than the flu, why did you only put in place a travel ban from China and not put in place other measures mitigating the spread of COVID-19, potentially saving tens of thousands of American lives.”

Trump responded by stating that he put in the travel ban earlier than instructed by Dr. Fauci and other scientists: “Joe Biden was two months behind me, and he called me xenophobic and racist and everything else, because I put it in. And it turned out that I was 100% right.”

The second question came from a mother, Barbara, and her daughter. Barbara, leaning Trump, spoke about her experience as a frontline ER doctor who worked throughout the pandemic. She asked about the financial hardships facing the hospitals and its staff, including the economic circumstances: “How are you going to get the U.S. back on track, both in terms of the economy and the pandemic?”

President Trump responded with his performance on the unemployment rates, and the upcoming third quarter numbers that he seemed optimistic about. Trump spoke about COVID-19 again, speaking of how when it came to our country we could have faced even worse including higher unemployment rates. He spoke about having the greatest economy in our country last year, and how he plans for America to return to that economy: “We had the greatest economy we ever had. We had to close it down, we saved two million lives. We’re opening it up. We have a V-shape and it’s coming back. It’s coming back very fast.”

Barbara’s daughter, leaning towards Biden, asked a question about the President contracting COVID-19, and if his opinion changed on mask wearing: “No, because I was okay with the masks, I was good with it. But I’ve heard many different stories on masks.”

Trump then referred, for the second time in 30 minutes, to a study he claimed showed “that 85% of the people wearing masks catch it.” Guthrie was quick to correct his interpretation of the study: “I looked at that report, it’s not about mask wearing. It was neutral on the question of masks.”

Cristy, a Republican leaning Trump, asked about his plan to make health care affordable after his repeal and replace plan on Obamacare. She stated that costs of health care have risen, and asked for his plan in 2020. Trump reinforced his stance on protecting people with preexisting conditions, but offered few specifics on how to do so: “The problem with Obamacare, it’s not good. We’d like to terminate it, and we want a much less expensive healthcare that’s a much better healthcare, and that’s where we’re aiming.”

Becky voted for Hillary Clinton in 2016, however she recently changed her voter registration. As an undecided voter, she asked about taxes: “What do you say to those Americans to tell them why you want the corporate tax rate lower and why that helps them?” President Trump responded by saying, “We have created more jobs than this country has ever created, we are up to 116 million jobs.” He stated that companies are pouring into our nation because of the tax rate, and that Biden’s plan for raising taxes will hurt the American economy.

Adam, a Democrat supporting Biden, asked President Trump, “What do you say to the voter who thinks it is hypocritical to act in that manner and that they can’t trust Republicans’ word?” President Trump explained his right to appoint a new justice, quoting the late Justice Ginsburg’s comments that president’s are elected for four years, not three: “There’s plenty of time. We’re going to do it before the election, but we also have much time after the election. But there’s no reason to wait, because it’s almost unanimous, it seems to me, certainly within the Republican party.”

Moriah, a pro-life Republican leaning Trump asked, “If Roe v. Wade is ultimately overturned in the future, what protections would be put in place or kept for where the mother’s life is in jeopardy in relation to high risk pregnancies?” President Trump did not give a direct answer, saying that he had not discussed election laws or abortion with any of his nominees: “I think, depending on what happens with Roe v. Wade, I think that perhaps it could get sent down to the states, and the states would decide. I also think perhaps nothing will happen. I have not talked to her about it. I think it would be inappropriate to talk to her about it.”

Guthrie asked Trump for his preference, if he wanted Roe v. Wade to be overturned. The President refused to answer, instead responding that he wanted to see Amy Coney Barrett confirmed to the supreme court and allow the justices to make their own decision: “How she’s going to rule, you’re going to find out perhaps. Or you might not find out. It may never get there.”

Cindy, a Democrat who is leaning towards Biden, spoke about her being the mother of a young male of color: “What will you and your administration do to better prepare our law enforcement officers to work in collaboration with the communities that they serve and also to protect the lives of innocent blacks and latinos from police brutality and injustice?” President Trump related to her, saying that he saw the same things over the summer and how terrible it was to watch. He went on to talk about criminal justice reform, prison reform, HBCU funding and opportunity zones: “I have done more for the African American community than any president. With the exception of Abraham Lincoln.”

The last question came from a Republican named Paulette who is leaning towards voting for Biden: “If you are elected to a second term, do you expect to pursue your previous efforts to cut the DACA program, why or why not?” President Trump said he would, but explained the difference between DACA and Dreamers: “We are going to take care of DACA. We’re going to take care of Dreamer. It’s working right now. We’re negotiating different aspects of immigration and immigration law.”