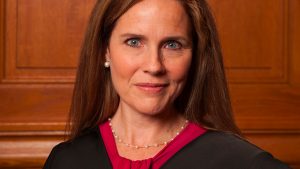 Amy Coney Barrett is President Trump’s nominee to fill the current vacancy on the U.S. Supreme Court. Photo by Rachel Malehorn (CC BY 3.0)

Amy Coney Barrett’s confirmation vote to join the Supreme Court got one step closer today as Democrats boycotted the Judiciary Committee’s voice vote to send her nomination to the floor of the Senate. Even though the final day of Barrett’s testimony before the Republican-led committee was last week, it is important for the Mason community to get as much insight into the process as possible.

The third day of hearings for Justice Kavanaugh two years ago was contentious as a scandal surrounding his previous conduct became the center of his nomination, but historically Barrett’s final day of questioning was more true to form. Though conducting hearings on her nomination was a clear flip-flop by the GOP Senators on the committee, a point made by Democrats throughout this process and on the first day of hearings, things were notably calmer than the Kavanaugh process.

Judge Barrett had a few rough moments on the dais, particularly with Senator Ben Sasse (R-NE)  during questioning about the first amendment. When the junior senator from Nebraska asked the appellate judge to list the five freedoms protected under the first amendment, she hesitated twice:

“Speech, religion, press, assembly… Speech, press, religion, assembly…,” she answered, counting them off with her right hand. “I don’t know. What am I missing?”

Sasse was attempting to throw the nominee a softball question, but the issue that he was addressing was on how the first amendment is made of interconnecting freedoms. Nevertheless, the fleeting moment was brushed off by Republicans immediately and became an attack line for Democratic pundits as the day continued.

It was a telling moment, however, for many as a constitutionalist nominee from a school of thought so dominated by the text of the constitution and played into later questioning about the nominee’s judicial philosophy.

Democrats made an effort to discuss the environment, healthcare, and the upcoming election. In recent days, this has become a particularly salient line of questioning as Judge Barrett has been particularly vague on her judicial styling; only saying that she was an independent mind aligned with the late Justice Antonin Scalia. The judge has expressed her independence repeatedly throughout the hearings, but has been notably sheepish on positions or contrasts between herself and Justice Scalia.

Beyond that philosophical question, the judge was also sheepish on her stance regarding the court’s role in elections. Judge Barrett was an associate on the 2000 Supreme Court case, Bush v. Gore and, if confirmed, would be the third justice on the highest court to have served as counsel to President Bush in that polarizing election. Similarly, she would not answer questions on the separation of migrant children from their families from Senator Booker (D-NJ).

Other questions are still unanswered about Barrett, who, prior to her initial nomination to the Seventh Circuit Court of Appeals, was only in private practice for two years and never tried a case nor argued an appeal.

Mason Votes will continue to follow this nomination as it leads to certain confirmation in the next week.