So You’ve Voted… Now What? 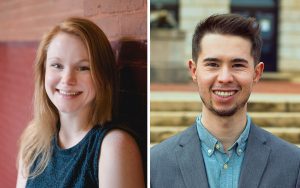 As the election draws near, Americans are voting early in record numbers.

From the workshop description: “Continue engaging with your elected officials. From local, to state and national leaders, make sure they know what issues matter to you…through everyday advocacy methods such as contacting your representatives, following developing policy, and joining community organizations.”

Mason Votes interviewed MacVaugh and Lowder to share some key insights from their workshop with the rest of the #MasonNation:

Q: For the students who attended your workshop, were they more interested in discussing or learning more about being activists after the election?

A: [Christopher] The workshop was focused on identifying issues that students care about and concrete ways that students can engage with officials who can influence these issues. Of course, we gave information about how Virginia is organized politically and how to find your members of Congress; you have to know how a system works before you can be active in it. 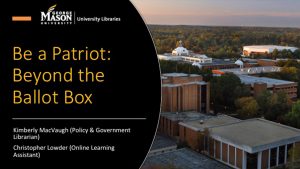 Q: Are there any upcoming election-related events sponsored by the Library that students should know about?

A: [Kimberly] If there’s interest we may revisit this workshop on how to get involved in your community after the election. The slides from our two-part October series: “Guide to Voting” and “Beyond the Ballot Box” are available for review on our site: infoguides.gmu.edu/vote/workshop

Voting and Voted: What’s Next?

Q: We are 11 days away from the election and many students have already voted. What should students reading this article do next?

A: [Christopher] First off, we think it’s wonderful that so many students are interested in voting in this election cycle. So, cheers to those who have voted already. For those reading this article, I would suggest taking time for themselves and paying attention to their local environments. Thanksgiving is coming up, and a lot of organizations need volunteer support.

A: [Kimberly] We are so proud of the Mason community and its high rates of voting and civic engagement! Christopher and I want students to know there are plenty of important ways to stay involved in your community, state, and country “beyond the ballot box.” You can see my library guide for some links to local and national options to get started: infoguides.gmu.edu/vote/civic

Q: What advice would you give students who feel their voices do not matter after the results of the upcoming election?

A: [Christopher] My first advice would be to take care of yourself. I was an undergraduate student during the 2016 election, emotions were high the day after the election. Then, I would say that elections are not one and done. If you want change, you continue to vote every year and you get involved. Look at history and look around you, people can make a change.

A: [Kimberly] Please try hard not to despair—action happens in your own community and we’ve seen recent examples of students having a big impact on their campuses and well beyond, on issues like climate change, racial injustice, police reform, immigration, and higher education, to name just a few. Electing leaders is just a small part of the process and important volunteering and community activism happens year-round.

Q: Why is it important for students to continue to engage with their government after this election?

A: [Christopher] Even when elections are not happening, students have a chance to make change and lend their voices to action. We have seen this happen around the country and around the globe. Voting is such an important right, but involvement does not end there. Students are affected by governmental decisions, and they should let their officials know what they care about.

A: [Kimberly] Exactly what Christopher said—decisions are being made locally as well as nationally, and they happen day in and day out. The Virginia General Assembly, for example, passes laws that affect George Mason University’s budget and students. The Fairfax City Council makes ordinances that affect students’ housing. Elected leaders are our “representatives” and it’s important to hold them accountable to represent you once they’re in office.

Q: What tips would you give students reading this article about 1) contacting their representatives, 2) following developing policies, and 3) joining community organizations.

A: [Kimberly] Elected officials and community leaders want to hear from you! Your voice is really critical and I would recommend thinking about some issues that affect you and/or are important to you particularly. Figure out what bills and proposed policies are being put forward by your representatives and let them know how you feel. An email, call, or letter goes a very long way, especially at the local level.

A: [Christopher] My tip would be that even the small things matter. Politics can be confusing, but civic engagement does make a difference. Kim made a great guide to sort out the clutter of information, but the biggest challenge is often taking the first step.

Q:  Anything else that you would want to tell students about the upcoming election or becoming an activist that was not answered above?

A: [Christopher] I would encourage students to make a plan to vote or remember to turn in their ballots first and foremost. Also, students need to know that they can do things to affect change. Even something as simple as writing a personal email to a city representative can make a change.

A: [Kimberly] You might not be aware that the library has so many great resources to help you learn more about your elected representatives and government and to help research policy issues that matter to you personally. You don’t need to have a paper due to check out our tools and databases and use them for your own advocacy! And I’m here to help, so be in touch anytime.

Contact Kimberly (kmacvaug@gmu.edu) or Christopher (clowder2@gmu.edu) if you’d like to learn more about the resources offered by University Libraries!