Trump and Biden Spar for the Last Time in Nashville, TN 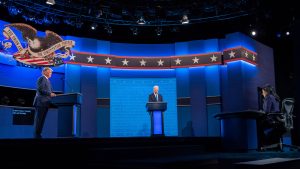 The final 2020 presidential debate, moderated by Kristen Welker of NBC News, was held at Belmont University in Nashville, TN on October 22, 2020. Biden for President Photo by Adam Schultz (CC BY-NC-SA 2.0)

President Trump and his challenger, former Vice President Joe Biden, wrapped up the final debate of the 2020 general election season in Nashville, TN on Thursday night.

Moderator Kristen Welker of NBC News, in a welcomed change from the previous debate, kept the debate stage orderly and civil, ensuring each candidate respected the other’s time to speak.

Welker’s strong moderation, combined with the introduction of a backstage mute button in case either candidate broke the rules and interrupted, allowed each to go further in depth with some of their proposals and plans.

Here are the top two takeaways from the final 2020 debate:

The COVID-19 pandemic, a topic that has dominated this campaign, was once again discussed by both of the candidates. With cases rising in over 30 of 50 states, and no sign of another relief bill in Congress, this was the opening topic and an opportunity for both candidates to lay out their plans for the nation to navigate a potential rise in cases throughout the winter months and beyond.

Pressed on his response to the pandemic, Trump reaffirmed his message that the administration has done its best against the virus and worked to make the case that Americans have to continue on with their lives and not remain in isolation.

In a rare reversal, however, Trump walked back some of his early comments on the pandemic after being pressed on them by both the moderator and Biden, saying, “Excuse me, I take, I take full responsibility. It’s not my fault that it came here,” while in the same breath doubling down on his anti-China rhetoric: “It’s China’s fault. And you know what? It’s not Joe’s fault that it came here either. It’s China’s fault.”

Biden countered this response, emphasizing the death toll and its impact on American families: “Number 1, he says that we’re, you know, we’re learning to live with it. People are learning to die with it.”

The battle over healthcare resumed again in this debate. With each candidate possessing very different views on healthcare solutions for Americans, they both wanted to highlight the differences each administration would have when it comes to enacting policies in this area.

Trump opened by emphasizing his administration’s accomplishment of rolling back the individual mandate of the Affordable Care Act (ACA), labelling it as “no good” and reaffirming his commitment to protecting Americans with preexisting conditions. Trump chose not to go into any further detail on what a healthcare plan would look like in his administration, despite multiple promises of one over the past four years of his term. He instead used the rest of his time to contrast himself with Biden on healthcare, claiming that Biden supports Medicare-for-All, a proposal championed by Biden’s primary challenger Senator Bernie Sanders (I-VT).

Biden countered saying “I support private insurance” and said of the improvements he would propose to the ACA, “it’ll become Bidencare. Not one single person with private insurance would lose their insurance under my plan.” He also discussed his plans to build on the ACA and strengthen it with a public option for those who do not qualify for state Medicaid.

Read a full transcript and watch clips from the debate from USA Today: www.usatoday.com/story/news/politics/elections/2020/10/23/debate-transcript-trump-biden-final-presidential-debate-nashville/3740152001/

Mason Votes wants to remind you that there is still time to vote, and to vote early!

Stop by your local polling place, bring a valid ID, and make your voice heard!