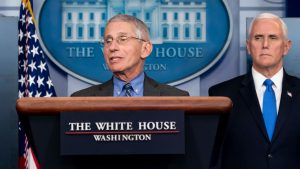 The COVID-19 pandemic, otherwise known as the coronavirus, has quickly become the dominant issue of Election 2020 and a perpetual cause of argument and tension among everyday Americans.

The fight over face masks, conflicting reports from White House officials, xenophobic finger-pointing during a global a health crisis (President Trump repeatedly refers to COVID-19 as “the China virus”), and a general politicization of the pandemic underscores an increasingly troubling divide not just in U.S. politics, but in the country’s cultural marrow.

A stark example occurred last May, when a heavily armed group of men stormed the Michigan State Capitol to retaliate against Democratic Governor Whitmer’s state-wide lockdown, a public health measure which inspired rallies across the country where many (if not most) of the participants refused to wear masks or to practice safe social distancing as an act of protest.

As the number of nationwide cases is again steadily increasing, President Trump is doubling-down on rhetoric that seeks to underplay the dangers of the virus, discredit health care and infectious disease professionals who have been working to curtail its spread, and highlight overly-optimistic promises of an imminent COVID-19 vaccine without citing data to reinforce his claims. Most scientists, including CDC Director Dr. Robert Redfield, caution that the earliest a vaccine might be available to the general public is “the second or third quarter” of 2021.

Dr. Anthony Fauci, a physician and immunologist who has served as the director of the National Institute of Allergy and Infectious Diseases for decades, was recently interviewed by Dr. Jon LaPook for a “60 Minutes” segment during which several topics were discussed, almost all of them tying into the country’s struggle with the pandemic.

One recurring thread throughout the “60 Minutes” interview appeared to be, as Dr. Fauci put it, the growing theme of “anti-authority” across the world, adding that, “Science has an air of authority to it. So people who want to push back on authority tend to…push back on science.”

Specifically, he believes that the overarching conflict between the White House and health care professionals has less to do with the President being “anti-science” and more to do with his desire to create an outward display of strength and resilience (which tends to happen at honesty’s expense).

Dr. Fauci pointed out how, historically, the President “sometimes equates wearing a mask with weakness.”

What makes this rift in perspective even more apparent and immediate is a political ad run by the Trump campaign in early October which used Dr. Fauci’s words out of context and without his consent. In the ad Dr. Fauci can be heard saying, “I can’t imagine that anybody could be doing more,” but Dr. Fauci has since shared his side of the story, stating that he was referring to the work the Coronavirus Task Force was doing earlier this year and that it was not an endorsement of the President’s response to the pandemic. According to CBS, the Trump campaign continued to broadcast the ad throughout key swing states, including Michigan, despite Dr. Fauci’s clarification.

Public health policy grounded in science is the only way to successfully combat a pandemic, but months of political gamesmanship has undermined trust in Dr. Fauci and science itself, leaving the nation divided on which recommendations to follow and vulnerable to an invisible enemy that respects neither ideology nor party affiliation.

Since the COVID-19 pandemic was declared a national emergency in March of this year, over 225,000 American lives have been lost, with the current number of confirmed cases nearing nine million.

Currently, there is no approved vaccine.