Polling Only Matters For So Long, and We’re Hitting this Cycle’s Expiration Date 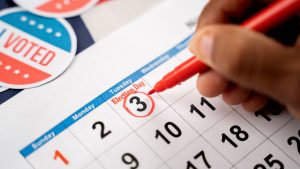 Election Day 2020 is only four days away… Make sure to VOTE on or before Tuesday, November 3, 2020! Photo by: lakshmiprasad S/Getty Stock Images

In these last four days of the Presidential campaign, things appear to favor Joe Biden in most, if not all, of the traditional swing states. Most voters have self-sorted themselves along part lines, but in the lowest undecided-voter election, that is not surprising. What is going to be the deciding factor of 2020 is the crossover vote.

Where early estimates suggested that between two and four percent of Republicans would flip to vote for the Biden/Harris ticket, Susan del Percio, a chief Republican strategist and partner at the Lincoln Project, indicated this morning that early voting exit polls show a five to six percent movement towards Biden among traditional Republican voters.

Additionally, there is little positive news for the President in the deep south, where his leads in Georgia and Texas have diminished in the face of racial unrest and the COVID-19 pandemic.

Polls are usually a solid indicator of momentary approval, but in the last four days of an election Americans typically push polls aside as they justify their vote and candidate to themselves and those most important to them. This year is somewhat different, with fewer undecided voters than at any time in recent memory, candidates who are stark opposites, and no guarantee that we won’t experience post-election unrest regardless of who wins. The polls cannot capture voters’ anxiety this close to election day.

Americans have early voted in record numbers in 2020, especially in states like Texas, where early voting matches total voting in 2016, a bad sign for the sitting president.

Consequently, eight other states have reached eighty percent of their 2016 total vote, and Florida is on track to surpass 85% of the total 2016 vote when early polls begin to close (varying by county) tomorrow at noon.

Joe Biden and Donald Trump are neck and neck in Florida, Texas, Georgia, and North Carolina. It is important to note, however, that Biden does not necessarily need any of those states to win the White House, where Donald Trump needs them all. There is no map scenario this election where Donald Trump wins re-election without Florida, Texas, Georgia, North Carolina, Pennsylvania, New Hampshire, and Ohio. In an election like this one, not only is that unlikely, but the strategy behind regaining the ground Trump has lost requires more resources and funds than his campaign can currently spend.

Of particular concern to the Trump campaign is Pennsylvania, where the incumbent must overcome a polling deficit and an energized electorate. Particularly this week after the unrest between police and minorities in Philadelphia, black voters are energized. Black voters, a traditionally difficult demographic for the president, continue to vote overwhelmingly for the Democratic ticket, meaning that Trump must overcome his deficit in western and central Pennsylvania with non-college educated white voters and a suburban population that has largely deserted him in the past months over his handling of the COVID-19 pandemic.

While Biden seems to hold the lead at the moment, the Trump campaign is party to lawsuits in Iowa, North Carolina, Pennsylvania, and the Navajo Nation in Arizona designed to limit the number of early and mailed absentee votes counted in marginal states. There is no guarantee that these lawsuits will be successful writ large.

President Trump won the 2016 election on the back of states that were mostly within the margin of error, and while most margin-of-error states are trending Republican this year, 2016 was a stark reminder that the improbable is certainly not impossible.

Here is where the polling stands today next to the current early vote numbers: