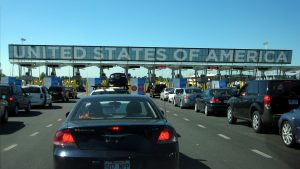 With November 3rd coming up in just 4 days, a key issue shaping voter preferences in the 2020 presidential election is immigration. President Trump and Vice President Biden have a vastly different view on immigration policy in regard to paths to citizenship, ICE, and overall views of immigrant’s place in the United States economy.

Biden puts less emphasis on strict border laws and wants to transition into a less restrictive agenda than that of Trump.

A signature issue in the Trump administration has been strenuous border security. The implementation of a southern border wall is one of president Trump’s central policies goals in hopes of lowering the number of undocumented immigrants crossing the border.

Neither Biden nor Trump are in favor of decriminalizing illegal crossing of the border, although Biden has promised to lower the number of border related criminal prosecutions.

Vice President Biden opposes a wall at the southern border, instead supporting “screening procedures at our legal ports of entry and investing in new technology.”

The two candidates also differ immensely on their views of the Deferred Action for Childhood Arrivals (DACA) program. This program began accepting applicants under the Obama/Biden administration back in 2012. In 2017, President Trump announced his strong opposition to DACA and announced plans to terminate the program. Trump has said he would reject the acceptance of DACA applicants, while the Biden campaign has discussed reinstating and expanding the DACA program to include protections for parents of Dreamers and eligibility for student financial aid. Biden has emphasized the positive impact that the DACA program has had on the economy and wants to invest in the future by further continuing the program.

The COVID-19 pandemic has necessitated changes to immigration policy to prevent international virus spread. The Trump administration has eliminated many immigration programs and terminated many cases of new immigrants seeking entry or asylum. The long-term economic effects of these actions are unknown and a point of disagreement among the two presidential candidates. Biden’s campaign has constantly put an emphasis on the importance of immigrant’s role in the U.S. economy, but has not explicitly stated how they plan to tackle the spread of COVID-19 while being able to keep immigration a key factor of the economy.