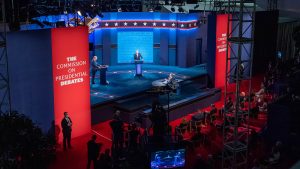 Most political observers knew that the 2020 election was going to be a contentious affair, but few were prepared for the spectacle of the first 2020 debate in Cleveland, OH that was roundly criticized as a new low for American democratic discourse. Marked by chaos, interruptions, and personal attacks, the first debate of 2020 was a disservice to citizens who traditionally look to the debates as a civic forum that informs their vote.

A Pew Research Center survey conducted during the spring of 2019 found that more than 85% of U.S. adults said that the political conversation in the country “has become more negative and less respectful.” The same survey revealed that 60% felt political discussion “has become less focused on issues” and 76% agreed it was “less fact-based.” And that was before the Cleveland debacle.

With 85% of the public united in their disgust for the extreme polarization and rancor of American politics in recent years, it is unclear if even the most civil or “normal” debates possess the power to change anyone’s mind.

For the first debate between Trump and Biden September 29th, FiveThirtyEight partnered with Ipsos to interview the same group of people before and after the event to track its impact on Americans’ views of the election. When asked about each candidate’s performance, Biden’s “good” rating was 60% versus Trump’s 33%. However, when the focus group was asked, “how likely are you to vote for each candidate?,” Republicans averaged a 3.8 out of 10 before, but dropped to 3.7 post-debate, and Democrats averaged an initial 5.0 out of 10 that increased slightly to 5.2 afterwards, indicating that neither side was particularly moved by what they witnessed. While American’s were not impressed with the Trump’s performance, it is yet to be seen if this will actually influence people’s votes.

The vice presidential debate on October 7th between Pence and Harris resembled a more traditional affair in that it was much more civil. While both candidates side-stepped some questions altogether, there was more discussion about policy and strategy than the first presidential debate. Fox News released a poll hours before the debate showing results of a national survey where Pence had 47% favorable vs. 48% unfavorable views, and Harris had 53% favorable vs. 40% unfavorable views (they did not provide post-debate results). Following the debate, a poll conducted by SSRS and CNN showed that 59% of viewers thought Harris won, while 38% thought Pence won. It is worth noting that snap polls following any debate are imperfect indicators and it is likely that both sides thought their own candidate won.

After the second presidential debate was cancelled, both candidates had separate town halls on October 15th. Trump’s event was hosted by NBC and Biden’s by ABC, with both airing head-to-head at 8pm EST. Nielsen ratings showed that Biden’s town hall on ABC reached 13.9 million viewers and Trump’s town hall reached a total of 13 million viewers between NBC, MSNBC, and CNBC. This is said to be a result of many calls to boycott NBC for airing Trump’s the same time as Biden.

Biden appeared to be very policy driven and intent on connecting with citizens asking questions, while Trump appeared to be more on the defensive end.

The second and final presidential debate took place on October 22nd and seemed like a return to normal compared to its predecessor.

With the fewest debates since 1996, the 2020 election cycle has been unique in many ways. By the start time of the final debate, 50 million Americans had already voted and the country is poised to become more polarized than it’s ever been (with the exception of the Civil War era). This calls into question whether the final debate (or any of them) really made a difference in voter turnout and citizen’s votes.

Regardless of who you think won the debates or how you plan to vote, it is imperative that you make sure your voice is heard…in 2020 and beyond!