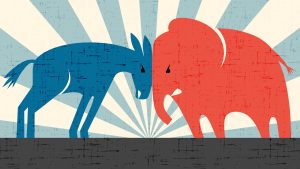 Blatant disregard for human life, a persistent display of xenophobic and racist ideology, incessant fear-mongering, and a general attitude that can best be described as callously aggressive, have unfortunately become corrosive themes that now define the work of the current administration.

Spreading outward in a ripple effect with President Trump at the center, is a continuous barrage of detrimental cause-and-effect reactions that have grown to occupy a sizeable fraction of the American cultural, social, and political infrastructure.

Largely unpunished police violence against unarmed American civilians, an insufficient and irresponsible federal response to the COVID-19 pandemic, and recent spikes in white nationalist hate group activity are some of the most painful problems on the minds of voters as November 3rd approaches, and an unavoidable reality in the current chapter of the American Experiment.

Some of these ills, like the virus, are new, but some, like the police killings of unarmed African American citizens and a newly emboldened generation of white supremacists, are dark, chronic poisons coursing through the nation’s veins. Both are equally dire.

2020 was, for many, a heavy year. A disastrous year. A cursed year. News stories that would normally occupy large chunks of time on the airwaves are fighting for time against a host of other stories of similar size and consequence. The past four years of American history have suffered from a toxic congestion of tragedy, scandal, and immorality.

As time plods on, we realize more and more the codependent nature of all major aspects of our political and social landscape, and the costs are staggering. Every weaponized statement (“Proud Boys, stand back and stand by,” was President Trump’s remark at the first 2020 presidential debate and was interpreted as a rallying cry by militant hate groups), every scandal (there have been too many to list here), and every policy decision that fails to uphold our shared values are part of a disturbing pattern of behavior that, at best, functions in the limited self-interest of its creators and at worst pushes the quality of American life back decades.

The candidates’ careers and reputations aren’t the only things on the line this November. Indeed, the very building blocks of our country’s political and cultural identity (and real, human lives), are at stake, too.

Immigration was touted as one of the central areas that then-candidate Trump promised to tackle and reform back in 2016. Fear-mongering and xenophobic rhetoric were just ugly overtones in the beginning, but bluster eventually became law. The Trump Administration’s “no tolerance” policy at the U.S./Mexico border has separated hundreds of families (many of whom were seeking help and asylum), with scores of children taken from their parents who have yet to be reunited to this day.

Asylum seeking (officially dubbed Temporary Protected Status, or TPS) is a legal, long-standing procedure by which those who are seeking assistance and shelter and cannot safely return to their country of origin due to events such as ongoing armed conflicts, environmental catastrophes, or other circumstances of similar magnitude, can find the sanctuary they need in the United States.

According to the National Immigration Forum, “TPS holders from El Salvador, Honduras, and Haiti contribute a combined $4.5 billion in pre-tax wages or salary income to our nation’s gross domestic product.” According to survey data from 2017, 88.5% of people from El Salvador and Honduras, who have benefited from TPS, were able to find employment. Many of them, according to the Immigration Forum, found jobs in a number of fundamental areas like food services and construction. Yet the Trump Administration has consistently worked for years to undermine existing legal protections and procedures set up to assist immigrants in need, thereby ignoring their contributions to our economy.

Children of all ages have suffered (and will likely suffer the effects of such trauma for the rest of their lives) from the unnecessary and inhumane family separation policy, and those responsible for its implementation have proved themselves unable to accomplish an undertaking of this size and complexity with the care and attention it requires. This procedure, carried out by U.S. Immigration and Customs Enforcement (ICE) and the Department of Homeland Security, is greatly exacerbated by the already dysfunctional immigration system at the southern border. According to the Guardian, a very narrow set of criteria is applied to those seeking asylum, which is intrinsically very difficult to meet. Claimants have to sustain themselves through an arduous, nerve-wracking process and often lack adequate legal representation when they finally get a hearing in immigration court.

The Trump Administration has been taking serious and disastrously-successful steps to hurt and undermine the TPS process. In many ways, as the situation keeps getting worse, it has become apparent that the administration is trying its hardest to essentially deter immigration from Central and South American nations altogether. It doesn’t seem entirely prudent to recall the President’s “s***-hole countries” remark from a few years back (since it has been eclipsed by an avalanche of subsequent offensive words and deeds), but it nonetheless serves as a less-than-eloquent summation of our administration’s attitude towards immigration at the U.S./Mexico border.

“America First” was the general flavor of the first Trump campaign, but any hopes that overt nationalism might unify the nation have since vanished into thin air. Just a quick glance at the past few weeks-worth of headlines, debates, and rallies is all the proof you need that our nation is anything but unified.

Although the deteriorating immigration system seems like a faraway thing or a legislative topic too large for ordinary people to focus on, it is nonetheless a problem deeply embedded in contemporary American life. Immigration has proven itself to be much more than just an “issue” in this year’s election. It is an open wound that, if not tended to soon, has the potential to infect the whole body politic.

The passing of Justice Ruth Bader Ginsburg last month, one of the many blows we’ve suffered as a nation during this already packed and painful year, left an empty seat on the Supreme Court and one less determined, powerful, and resounding voice for progressive humanitarian causes in our government.

This moment of national mourning and loss was quickly overshadowed by a rushed attempt on the part of Senate Republicans to insert a replacement that would cement a conservative 6-3 majority on the Court. In an election season marked by charged passions and heavy uncertainty, the rush to confirm a replacement for the late Justice Ginsburg just days before a general election has only increased division.

Judge Amy Coney Barrett was confirmed by the Senate last Monday, October 26th, making her the 103rd Associate Justice of the United States Supreme Court. Barrett’s prior judiciary experience at the federal level was as a judge on the United States Court of Appeals for the 7th Circuit from November of 2017 to October of 2020. Her track record from that three-year period, according to Human Rights First (based on 25 immigration cases reviewed by this organization), was decidedly reflective of a conservative ideology. Based on data from those 25 cases, Barrett “affirmed, or declined to review, decisions that went against” immigrants seeking asylum. Often her decisions “upheld many” of the rulings made by the immigration judges who were appointed by the current administration.

Barrett’s track record, appointment, and confirmation to the Supreme Court are, to put it mildly, a big deal. This is a part of recent political history that will have consequences for a long time to come. “Norms” and “rules” are not just words that can be thrown around in meek dissent—they mean something.

The foundational values of our country, the bricks that keep the whole notion of democracy and government “of the people, by the people, for the people” standing, have begun to crumble under a nauseating series of ego-driven political maneuvers over the past four years. Like a drawn-out chess game, there have been displays of strategy and planning, but now, perhaps more potently than ever, we can see the consequences that accompany every move.

No chess master would advise this much sacrifice.

Editor’s Note: Mason Votes is a nonpartisan website and we publish student opinion from all sides of the political debate. Email us at stumedia@gmu.edu to submit your work for consideration.