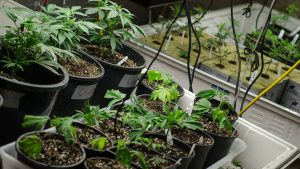 A legal marijuana grow operation in Colorado. Photo by: Brett Levin (CC BY 2.0)

As the dust settles on the 2020 presidential election, another winner emerges to join President-Elect Biden, legalized marijuana.

Through state ballot questions presented to voters, four states voted to legalize recreational marijuana for its citizens, and by healthy margins. Voters in Arizona, Montana, New Jersey, and South Dakota all voted to amend their state constitutions to include legalized marijuana for adults 21 and over. Look for these measures to begin rolling out and taking effect as state legislatures finalize the intricacies of the measures in 2021.

South Dakota was the standout here, as they didn’t even have medical marijuana prior to this election. Voters in this state approved two separate ballot measures that legalized both medicinal and recreational marijuana, illustrating Americans rapidly evolving views on legalization. This also shows that voters don’t seem to be split on marijuana legalization by party, as President Trump won the state of South Dakota.

Prior to the election, there were 11 states with legalized recreational marijuana, and these additions now bring that to a total of 15 states. Washington, D.C. has also legalized marijuana in recent years. Their regional impact will be large, with many of the states surrounding these now “legal” states potentially being influenced to reform their drug policies and consider legalizing marijuana as well. For example, elected officials in New Mexico have already began calling for their legislature to consider a bill to legalize marijuana, no doubt influenced by bordering “legal” Colorado and now Arizona.

Americans’ growing change in views on marijuana are being seen in regions that have held out on entering the national discussion around legalization. Mississippi approved medical marijuana, making it a standout among southern states, proving that Americans views on marijuana and drug policy are evolving as more young people enter the electorate.