Peach State Voters Will Decide Which Party Controls the Senate 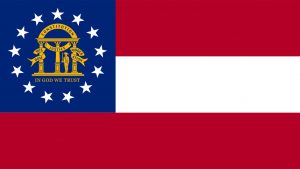 Both U.S. Senate seats in Georgia will be decided in a January 5, 2021 runoff election after no candidate crossed the required 50% threshold on November 3rd. Georgia flag image by: Marcia Todd (CC BY 2.0)

Georgia has become a highly contested state this year and the nation is still waiting on an official vote count between former Vice President Biden and President Trump. However, there are TWO Senate races in the Peach State that were undecided on November 3rd that will be decided in runoff elections set to take place in January 2021.

The two runoffs in Georgia will decide control of the United States Senate. Here is a look at both races: 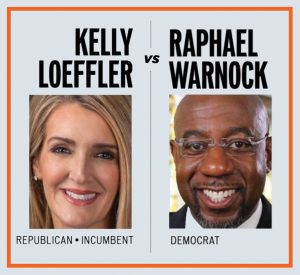 Earlier this year, Kelly Loeffler was appointed to the Senate to fill a vacancy by Republican Governor Brian Kemp. Loeffler’s campaign website says the candidate “has worked in the US Senate to spur economic growth, crackdown on illegal immigration, champion fair trade deals, protect farmers, and keep our families safe.”

She will be running against Reverend Raphael Warnock, the Democratic challenger. Warnock’s campaign website says the candidate “will bring to Washington the concerns of struggling Georgia families who wonder why no one is looking out for them. He will focus on fighting for quality, affordable health care, for the dignity of working people.” 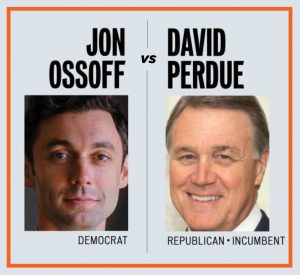 In the other Georgia Senate race, Democrat Jon Ossoff is looking to unseat incumbent Republican Senator David Perdue this January.

Ossoff’s campaign website says the candidate is “running to ensure every Georgian has great health care, to deliver historic investments in clean energy and infrastructure, to rebuild this economy so working families and small businesses thrive, and to root out corruption.”

Perdue’s campaign website says the candidate “has a strong record of delivering results for the people of Georgia and is a steadfast defender of the principles that make our country great: economic opportunity for everyone, individual liberty, limited government, and fiscal responsibility.”

THE RACE IS ON

Tons of notable members from both parties will be heading to Georgia to push for their respective candidates, such as Andrew Yang, Marco Rubio, and Vice President Mike Pence.

Both parties and candidates are raising millions of dollars in two races that are expected to be among the most expensive Senate campaigns in history.

Both Georgia Senate runoffs will take place on January 5, 2021.

Eligible to vote in the Georgia Senate runoffs?