A Peaceful Transition is Essential to the American Experiment 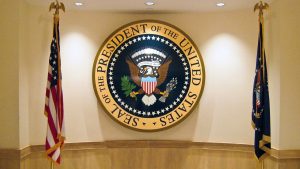 Seal of the President of the United States. Photo by: Sharon Mollerus (CC BY 2.0)

The mechanics of the peaceful transfer of power of the U.S. presidency to a new administration is something we don’t think about very often. Every four years, we take for granted that the candidate who doesn’t win an election will concede defeat and graciously work with the incoming leader to ensure a smooth transition that maintains continuity of government. This “passing of the torch” from one administration to another is a fundamental component of our system of government that sends a powerful message to the rest of the world: Democracy works.

A peaceful transfer of executive power exemplifies the ideas of compromise, civility, and unity that the nation and its leadership have observed without exception since the time of the Founding Fathers. “Peaceful” and “transition” are two words key to the general idea of what America is.

A “free and fair” election is at the center of the American whole, made up of many moving parts that were designed with changing times in mind. This is why we have a process designed to help amend the Constitution as necessary. American democracy was conceived as an always-changing enterprise, a living thing, a continuous experiment.

Moving forward after a presidential election (hopefully with a sense of diplomacy and expediency) is the best way to ensure that crucial steps and ideas are preserved. It’s been referenced almost to death, but standing together in order to “preserve the Union” is a concept as integral to what this country is as gravy is to mashed potatoes, or peas to pods, or Jonah to the whale. To borrow a phrase, it is “self-evident.”

While not an explicit part of American law or the U.S. Constitution, conceding the presidency with respect for the winning candidate and in service of the larger mission of carrying on the work of democracy is a time-honored tradition that highlights two important things: the democratic processes at the heart of our country work as they were designed to, and that a new public servant elected by a majority of the voters will take the reins of executive power to move the nation forward and ensure national security.

Changing over the leadership of an operation as big and multi-faceted as the government of the United States requires an orderly transition of power buttressed by good-faith collaboration and open communication. A lack of access to classified information and resources from the outgoing White House occupants only exacerbates challenges that the incoming administration will face as they pivot from campaigning to governing.

John R. Vile, professor of history at Middle Tennessee State University, told National Geographic that it’s not the Army or the Navy that keeps the country together, “it’s the notion that we are bound together by certain great principles and that our similarities are more binding than our differences are.”

A famous example of a concession done right was demonstrated by late Senator John McCain (R-AZ), who ran against former president Barack Obama in 2008. He was not just acknowledging Obama’s win and his own loss, but he was also underscoring the importance of the binding links between the two major parties, even if antagonism colors a majority of their interaction.

McCain reiterated the power of the people’s vote, and congratulated his opponent (and fellow public servant) on winning an “historic election.” “The American people have spoken, and they have spoken clearly,” McCain elaborated, noting that “Senator Obama…achieved a great thing for himself and for this country. I applaud him for it.”

Ron Elving, writing for NPR, has pointed out how “the concession is not…for the sake of its maker. It does nothing for the losing candidate” but that it’s actually “for the sake of everyone who needs closure,” like “the losing candidate’s family, staff, campaign workers and party rank and file.” Elving concludes that a timely and dignified concession speech (or statement of some sort) is not just a representation of the country’s internal political dynamics persevering through changing administrations, but that it’s also a signal of what the losing candidate “cares most about.”

It’s now been roughly two weeks since Joe Biden became the President-elect, and President Trump has shown little to no sign that he will acknowledge the shift in leadership, let alone offer a concession. Accusations of voter fraud, brought up by himself and his supporters through Twitter, Fox News and press conferences (just to name a few examples), do nothing to help the country move forward, console those who were passionately rooting for the other side, or help unify and heal a country that has endured so much hardship in such a compressed period of time.

None of the objections and challenges to the election results brought by the Trump team are projected to change the outcome of the 2020 election. No concrete evidence of widespread ballot tampering or illegal activity in relation to the election have been confirmed or established, and all signs still point to the fact that, as long and stressful as the week of November 3rd was, the system at the heart of our democracy worked correctly and lawfully.

A public concession acknowledging that in a few months someone else will be in charge of running the executive branch of government clears the air in a way, letting supporters of both candidates know that the democratic process is carrying on, that voting does indeed matter, and that the country, as flawed as it might be in ways big and small, stands resolute behind the power of the people to choose their own leaders from local dogcatcher to the highest strata of power.

It’s clear that the divide in political ideologies is as present today as it was four years ago, but change, however slow and muddled, has begun to take shape. Dragging out the concession process by proliferating unsubstantiated claims that the election was “rigged” and stalling the process of healing that America so desperately needs is not in keeping with even recent presidential history. Rather it is an unfortunate set of shortsighted maneuvers that are ultimately as self-defeating as they are corrosive to America’s soul and all the work that has been carried out thus far to preserve and strengthen it.