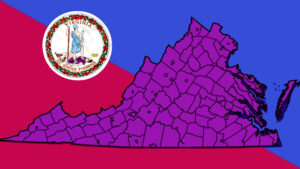 Virginia was once referred to as a “purple state” since voters had a track record of electing officials from both parties, but that trend has shifted in recent years as the Commonwealth becomes more reliably blue. Map image by: VCU CNS (CC BY-NC 2.0)

Virginia was a big deal. Arguably, it was politically the most important in the nation.

Virginia’s “big deal” status remained true due to its membership in the exclusive club of “purple states,” states who do not typically stick to voting for just one party in their elections, instead opting to vote for both parties frequently and intermittently. Electoral victors in the Commonwealth often win by the slimmest of margins, but it was clearly possible for both parties.

For many years Virginia has been viewed as a “bellwether” in national politics, possessing great predictive potential and electoral weight. NPR even went so far in 2012 to say that it could be Virginia’s “bag of 13 presidential electoral votes that will be the key to deciding who occupies the White House in January.” President Barack Obama famously ordered his campaign staff in Maryland to focus on Virginia instead of their own state’s outcomes in 2012.

Willingness to vote for both parties in national elections also trickled down to Virginia’s statewide elections. Starting in 1977, the winner of the Virginia governor’s race had always proven to be a member of the opposite political party than that of the incumbent president. Typically, in a midterm election (held two years after a presidential election), the president’s political party tends to lose a substantial number of seats in Congress. In short, the party winner of the Virginia governorship and the party winner of the Congressional majority almost always coincided with one another. This fact made the Virginia gubernatorial election a strong indicator for the midterm elections which came a year after.

However, in recent years, some things have changed for the Commonwealth’s status as a bellwether. The last time that Virginians elected a Republican candidate in a statewide election was 2009, with the victory of former Governor Bob McDonnell. 2021 marks the 12th year this trend has continued.

The most important factor in this current Democratic sweep is the demographic shifts seen in central and northern Virginia. Chesterfield County, Loudoun County, and Mason’s very own Fairfax County are examples of areas of Virginia that have seen radical population expansion when comparing the 2010 census numbers with the 2020 census numbers. A quality that all three of these counties share is the fact that they have taken on a new Democratic identity in recent years. All three voted for Republican George W. Bush in the 2000 election, with Fairfax going for him by approximately 2%. However, in 2020, they all went for Democrat Joe Biden, with Fairfax going for him by a stunning 42.2% margin. This would be a minor development if it weren’t for the fact that these counties hold a disproportionate amount of voting power due to their large population bases comparative to the rest of the state. This shift is not unique to just the three counties listed above; many localities that have seen a similar swelling of population have also seen a massive expansion in their Democratic voting base alongside it.

Another part of the reason Virginia has sharply turned Democratic is the unpopularity of certain statewide Republican figureheads. Notably, the corruption scandal of former Governor Bob McDonnell tarnished the reputation of the Republican party within the Commonwealth. In this scandal, Bob and Maureen McDonnell were indited on charges relating to illegal campaign gifts, which included luxury vacations and hefty loans totaling to $165,000 dollars from businessmen in the state hoping to gain preferential treatment. After this perceived betrayal of their support, many Virginians grew deeply wary of the Republican party. The low approval of the Donald Trump administration and the backlash attached to it, is an example of another disliked Republican figurehead. According to Real Clear Politics polling aggregates, the job approval of former President Donald Trump in Virginia was consistently in the 30% range, an extraordinarily low acceptance for a president. The disdain for Donald Trump in Virginia can be seen as a driving factor in its modern shift towards voting for the Democratic party.

Due to the recent outpouring of support for the Democratic party, the state broke its long-held tradition of voting against the incumbent President’s party in 2013, opting to elect Democrat Terry McAuliffe as Democratic President Barack Obama held office. McAuliffe beat challenger Ken Cuccinelli by a 2.5% plurality. While slim, it was substantial as a habit breaker.

In 2017, Democrat Ralph Northam won the governorship, while Republican Donald Trump was president. This was seemingly a return to form. However, something else substantial happened this election that often goes unrecognized. Ralph Northam beat his opponent Corey Stewart by 9%, a far higher margin that his predecessors. While not as high as Bob McDonnell’s 17% margin in 2009, it is still a substantially high victory margin in a Virginia election. It is also notable that Joe Biden won the state in 2020 by a margin of 10.44%, which is the largest victory percentage of a presidential candidate since George H.W. Bush in 1988.

The fact that Northam and Biden won by similar percent differentials, points to the potential stabilizing of Virginia with a firmly Democratic voting identity.

With these facts in mind, is it still truly possible to call Virginia a purple state when its normative identities and demographic realities have shifted so drastically towards one side? Can a state that is now so separated from the nation’s moderate political identity still hold a predictive power over it? Are the recent evolutions of the state’s voter base momentary or permanent? Countless difficult questions are posed by Virginia’s recent leanings and cannot truly be accurately answered until we see the results of the upcoming 2021 gubernatorial election.