Serving Two Terms as Virginia’s Governor is a Rare Phenomenon 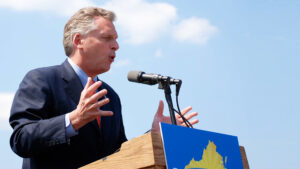 Virginia is the only state in the nation who limits their governors to only one consecutive term in office, making incumbent governors serving or running for a second term a rare phenomenon. Photo by: Kate Wellington (CC BY 2.0)

Terry McAuliffe holds a strong and unique advantage coming into Virginia’s 2021 gubernatorial election. This is because he served a previous term as governor from 2014-2018. Two things of note arise from this fact.

There is a well-documented phenomenon among political scientists called “incumbency advantage.” This is where an incumbent politician who runs again is overwhelmingly likely to win re-election. Incumbency advantage arises from many different factors. Most notably, a strong name recognition advantages the incumbent. There is no better press than having your name already widely known. They also have a tangible track record to run on, which can help prop them up during the campaign as a “proven and tested” leader. Outside challengers often have a hard time gaining either of these advantages due to their lack of experience actually holding the office they are running for when compared to their opponent. In 2018, the U.S. House of Representatives had an 91% reelection rate, and the U.S. Senate had an 84% reelection rate. Overall reelection rates from 2008-2018 was 92.1%.

While a gubernatorial candidate like Terry McAuliffe being an incumbent in an election may seem ordinary in any other state, in Virginia it is extremely abnormal. This is due to Virginia being the only state in the nation who limits their governors to only one consecutive term in office, making incumbent governors serving or running for a second term a rare phenomenon. Essentially, once you serve once, you must wait another 4 years to run again. This discourages re-election campaigns in the state, as evidenced by how extraordinarily uncommon they are. The last time this happened was with former Governor Mills Godwin, who served from 1966-1970 as a Democrat and 1974-1978 as a Republican. Aside from this example, there is a very slim handful of Virginia governors who have run and served for two terms.

These two facts are substantial for Terry McAuliffe. His name is widely known throughout the state as a former governor. Since he is interconnected within state and national government due to his time in office, he naturally has a far higher networking reach than Glenn Youngkin, which provides him greater opportunity for exposure and fundraising efforts.

According to Real Clear Politics polling aggregates, McAuliffe had a spread of +11.2 job approval as governor, a starkly high number that potentially has risen over time as his term of office has elapsed and political fervor around him has subsided. Much of his track record is deemed as positive within the state, examples being net positive job growth and a reduction of homelessness rates by 27% during his tenure. His overwhelming victory in the Virginia Democratic gubernatorial primary can be seen as further evidence of his overwhelming popularity, as well as his wide name recognition when compared to other state politicians.

In short, McAuliffe has ridden the wave of incumbency so far, but his overall incumbency advantage may not be as potent as Democrats hope.

To toss his advantage, some may point to the case of Mills Godwin’s second term being a slim majority victory in 1973. Godwin won by a mere 1.4%, meaning his incumbency advantage was not entirely fierce or absolute. This slim victory can be attributed to other reasons, such as his switching of parties in between his terms, yet it points to a wider potential rejection of preferential treatment of former incumbents in Virginia. This is a worrying fact for McAuliffe, as it means that his former track record and tenure may not be enough to carry him to victory.

There is also the question of time elapsed between his terms. McAuliffe has been out of office for 4 years, an eternity in the political world. The American political landscape has drastically changed since he left office, with questions of isolationism and democracy being put under a new spotlight with the election and events of President Donald J. Trump. While McAuliffe has a largely positive track record, he is entirely untested in this new political landscape. To many new voters, who have gained the ability to vote from either moving here or coming of age, McAuliffe may be an entirely new face to them. Incumbency advantage typically works its ways stronger when the incumbent is running for a directly consecutive term for the same office they initially served in. McAuliffe only has one of these factors, and it may come to harm him.

With these facts in mind, does McAuliffe have an incumbency advantage? Has too much time elapsed? Has the landscape changed too much? Is it even possible to have incumbency advantage in Virginia? On November 2nd, these questions will be answered by Commonwealth voters as they head to the polls to elect the next governor.

Photo by: Kate Wellington/sharedferret (CC BY 2.0)